Four generations of the McCall family have compassionately attended to the funeral needs of Greater Victoria since David M. McCall and brother, James M. McCall founded McCall Gardens Funeral and Cremation Services in 1921. Nearing a century of supporting generations of Victoria’s bereaved, it is no surprise that the McCall family procured the input of the community before expanding their business. The results of the poll affirmed the family’s vision for moving to a new location to create “an uplifting atmosphere that connects with nature in a park-like setting.” When the community spoke, the McCalls listened. The result of the move is 8,000-square-feet of natural light filled adaptable space designed by Peter de Hoog at Sequoia Gardens in Royal Oak. 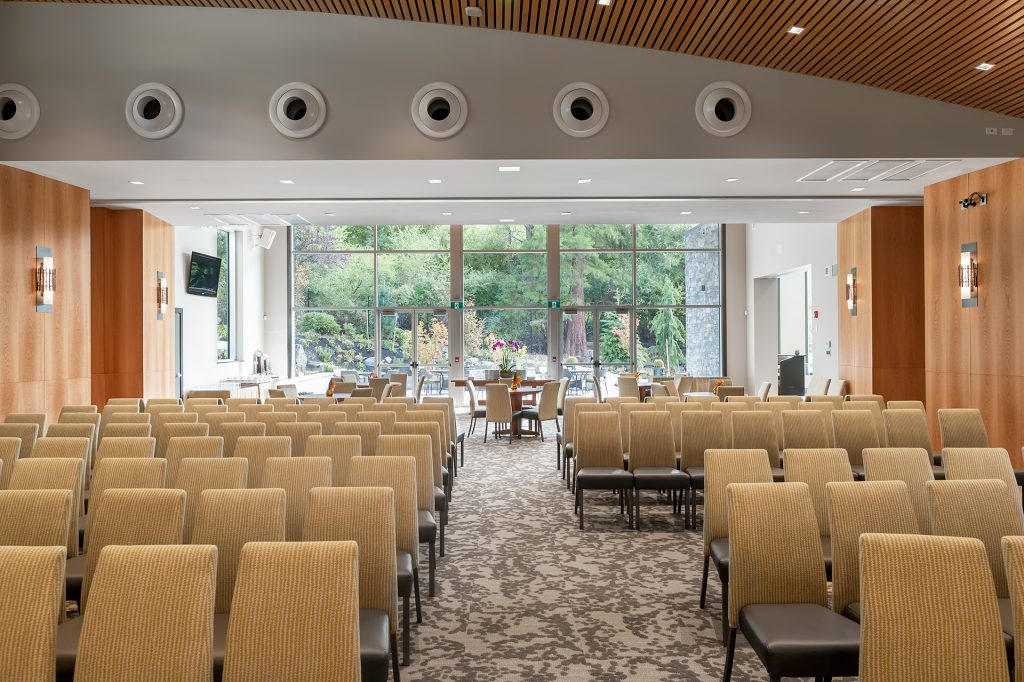 Built in the 1950’s by John A. DiCastri, the original McCall Bros funeral home provided funeral services to over 800 Victoria families every year since 1921. As difficult as it would be, the McCall family knew it was time to expand from their downtown Di Castri-designed chapel and gathering space at Johnson and Vancouver streets. “When we envisioned our new space we realized that we were not only competing with other funeral homes but also golf courses, hotels and other event centres. We wanted to build a facility that didn’t feel like a typical funeral home,” says vice-president, Trevor McCall.

Trevor adds that “my dad purchased the 2.3-acre Sequoia Gardens property in Saanich’s Royal Oak area in the 1990’s and had the vision to move our full operation one day. A creek meanders through the sequoia tree-lined property right beside the Royal Oak Burial Park so the move made sense. The expansive property had a single family house on it and was owned as a funeral home that could hold approximately 60 people when we bought it.”

They broke ground in July, 2015 and by August, 2016, the McCalls had moved into their new facility. The design took about a year and a half including permits, consulting with arborists, biologists, engineers and municipalities. “It was the first time our family has done a massive project like this — we couldn’t have done it without our amazing team,” says Trevor. 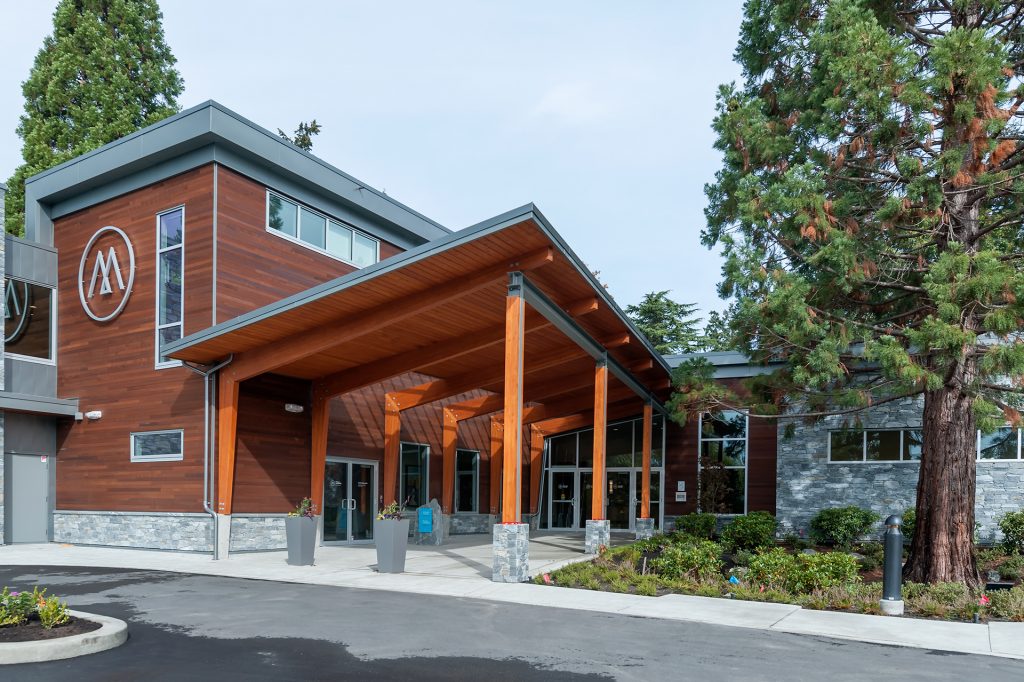 To complement the facility’s natural surroundings, the family envisioned a west coast contemporary aesthetic that would visually bring the outdoors in and capitalize on natural light. Architect Peter de Hoog of de Hoog & Kierulf Architects delivered. “It was important to us to build around the trees and comply with the setback requirements around the creek so the design became quite complex with all the environmental considerations.

We worked with engineers and biologists and took a lot of care for the environment,” adds general manager, Craig McCall. A particularly thoughtful feature is the rain water system designed to channel water from the roof and parking lot to be absorbed back into the ground where it will be cleaned, filtered and transported to the salmon-bearing creek on the property. 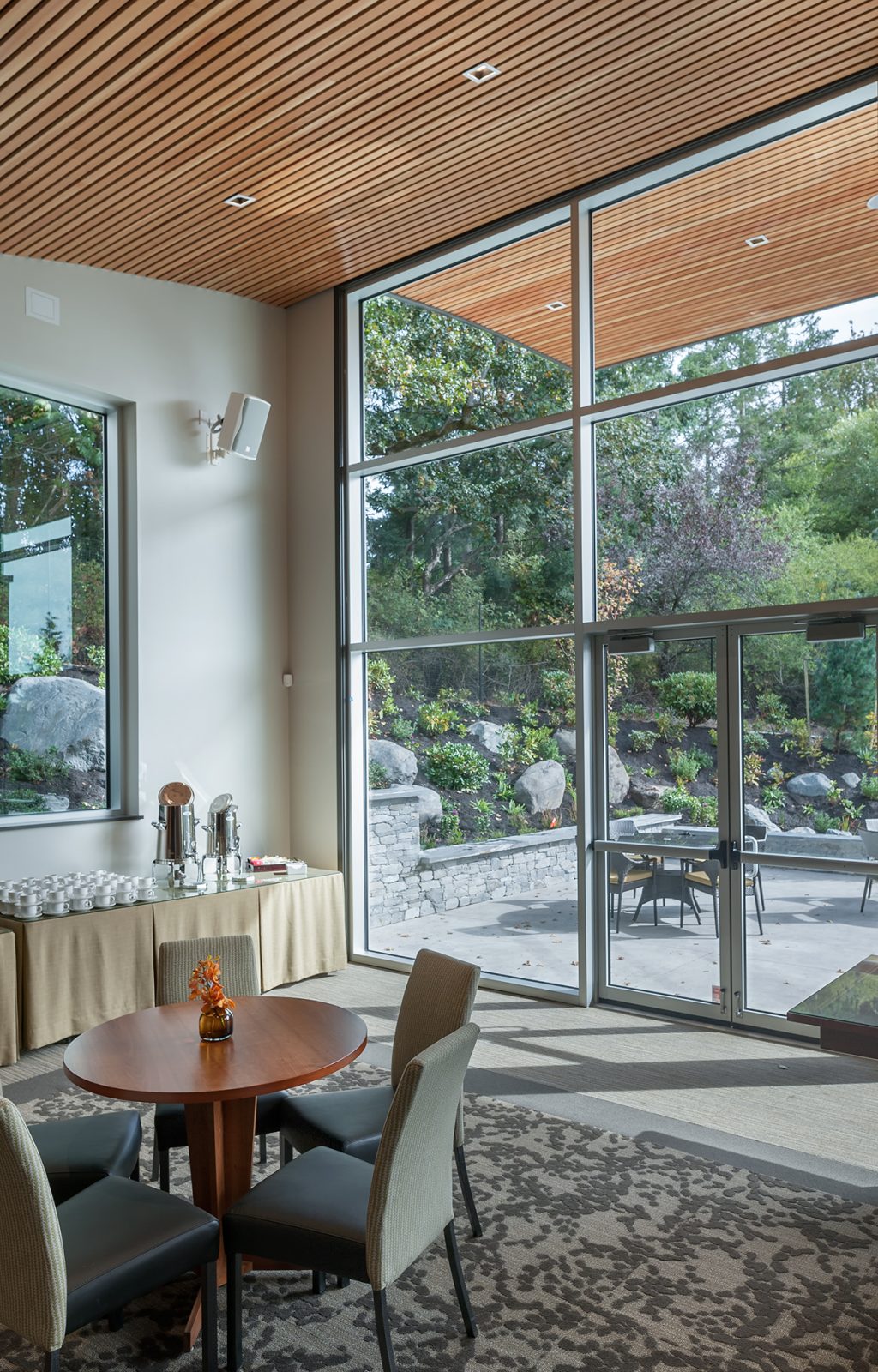 To capture natural light and create an airy atmosphere, the design incorporated high ceilings in every room. A direct nod to the beautiful grounds, natural materials including cedar, stone, glass and cherry wood create a natural west coast feel. “Principal Designer, Sandy Nygaard of Nygaard Interior Design and Interior Decorator, Dawn Garneau were amazing and understood our vision right away,” states Craig. Nygaard brought the cherry paneling and rock scheme which spoke to the McCall’s vision of creating a seamless transition to the outdoors. Even the organic lines in the carpet mimic the natural contours of rocks or leaves on the ground. 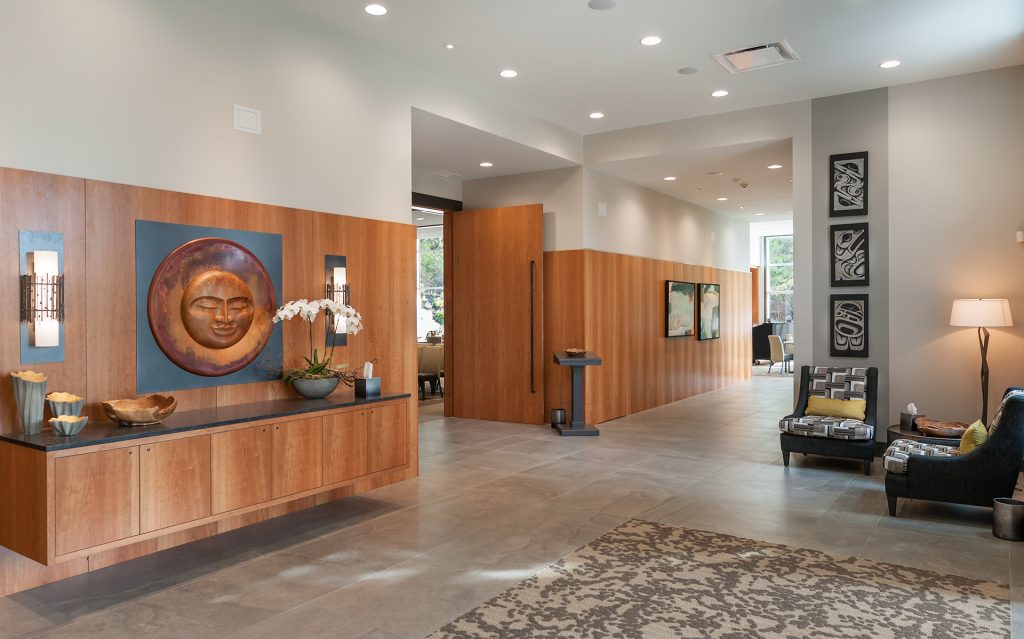 “There are a lot of moving parts in a funeral home with privacy and quiet a top priority. We thoughtfully planned the new layout and flow knowing that room configurations would be extremely important to how the home would function. Our community suggested more flexibility within the design, adds Craig, so now we can host formal or informal services with different rooms offering unique features. 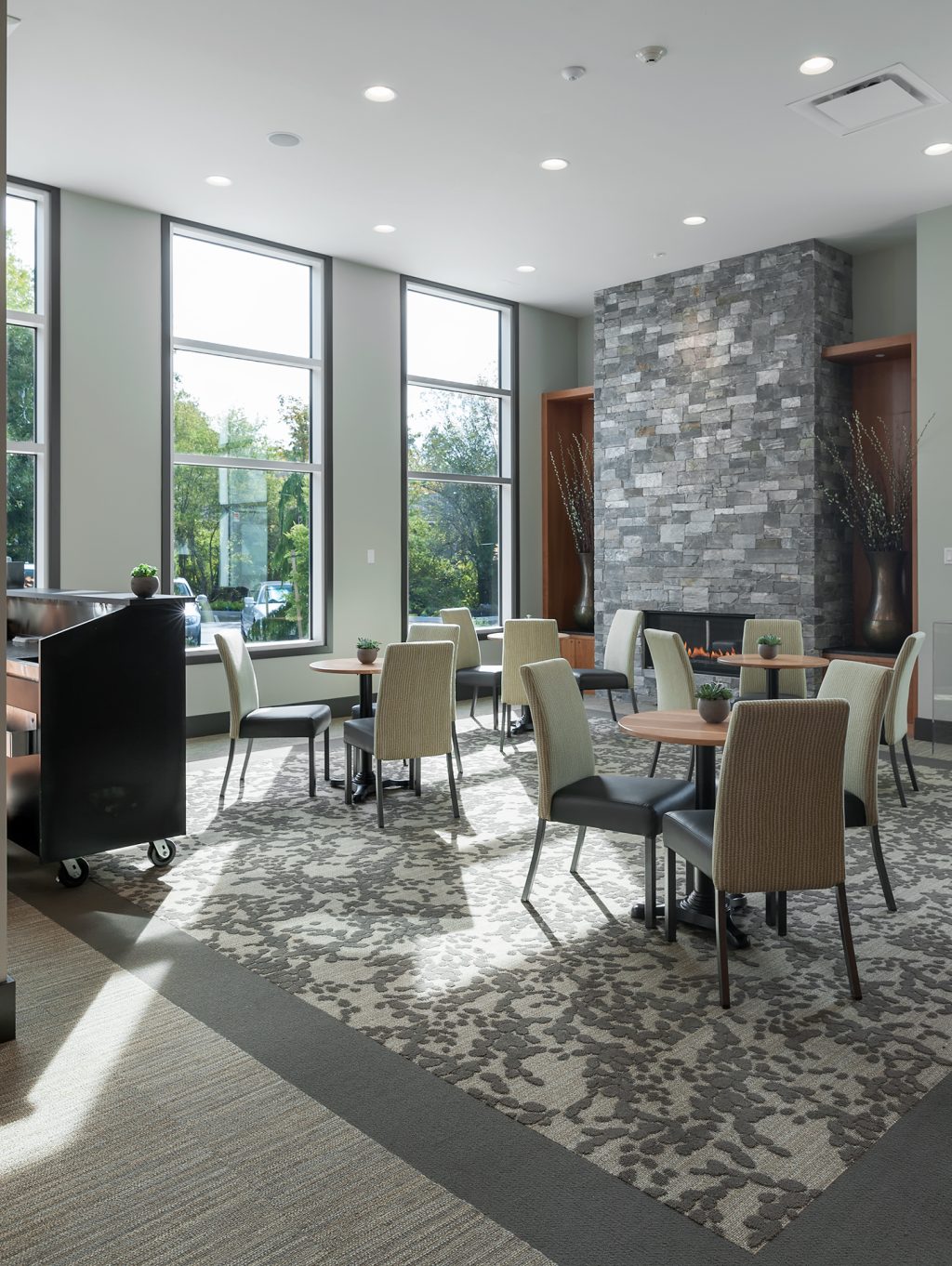 For example, if people want an informal service with a bar and fireplace we can accommodate that. High-performance technology for personal videos is an option and there is a physical divide between the funeral home and the event centre.” 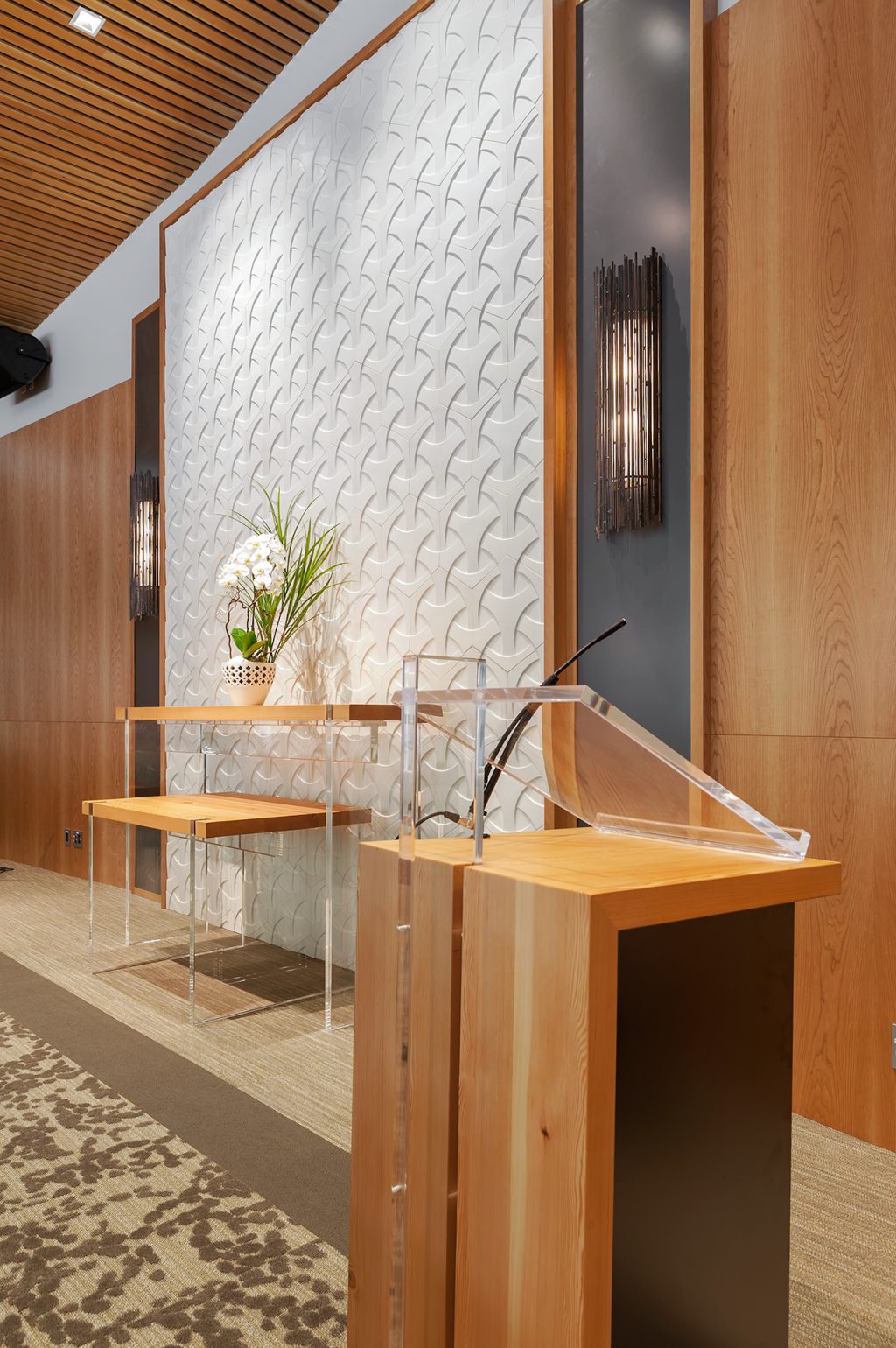 Autonomous Furniture Collective custom built tables out of both cherrywood and maple and the alter in the event centre was custom built from reclaimed wood from Belmont High School. Proudly supporting the local economy by sourcing local contractors, retailers and even local artists and photographers throughout the entire project, Trevor adds that “construction management company, Durwest Construction did an amazing job for us. They were great at sourcing the best value and gave us a top notch team that kept us on budget and on time.” 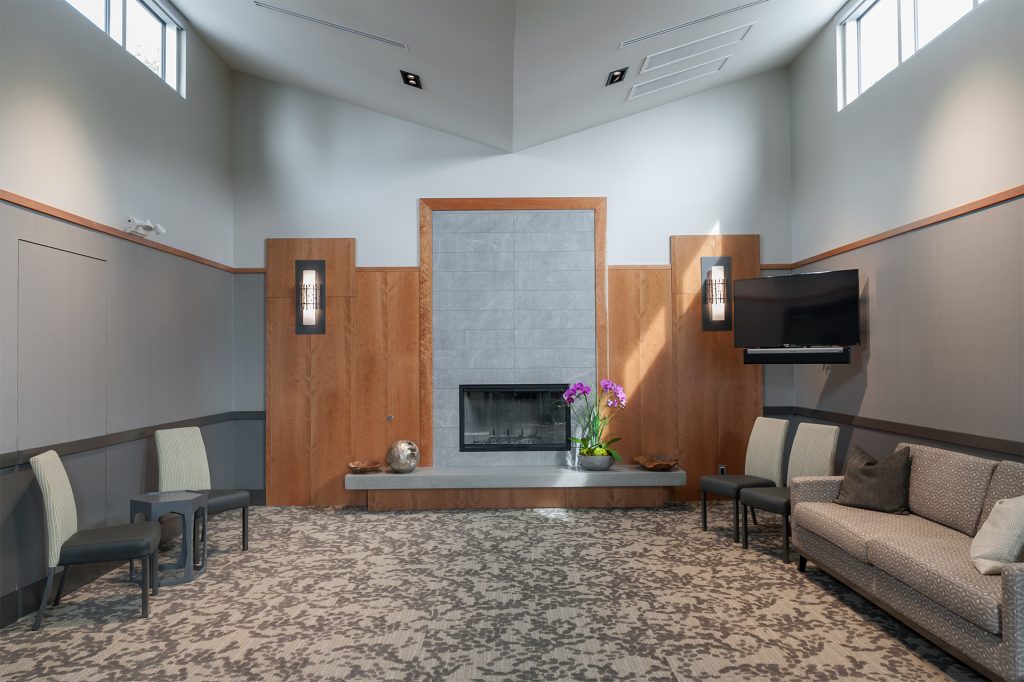 “The response from families has been incredible — it has been all positives — some have said it looks like a modern hotel or that they would like to get married here. We can now respond to families with a variety of services — from a chapel upstairs to outdoor services on the patio. We did a dove release recently that was incredibly magical. Historically, it feels like we’ve come full circle from our great-grandfather tending the gardens of McCall Gardens to another beautiful landscape here at Sequoia Gardens. We’re excited to see it bloom in the spring.”