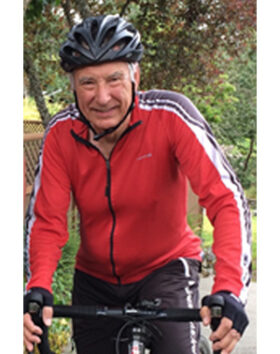 Alan was born June 6, 1948, in Liverpool England and moved with his parents to Victoria, BC at the age of six. As a young child, Alan’s deep love for and connection with nature found expression through exploring the tide pools and coastline of Beacon Hill Park and fishing with his father. At thirteen, Alan began his life-long love of cycling and competitive bike racing. After graduating from Mt. Doug High, he studied Anthropology and Creative Writing at UVic and had multiple poems from that period published.

In 1974, Alan began his studies at the Victoria College of Art, exploring drawing, painting, and sculpture, and eventually earning the honour of becoming the first Associate of the College. He went on to teach at the college and became the Head of Evening and summer classes. His art practice was an integral part of his entire life.

In 1976, Alan married his beloved Joanie Kyle, beginning a long, loving partnership, and soon after started a family with the arrival of Michael and David. Alan was embraced by and cherished spending time with the broader Kyle family. Also, during this time, Alan worked as a bicycle mechanic, first at Gordon’s Sporting Goods and then at Russ Hays. In 1981, Alan went back to UVic to earn his professional teaching certificate, and upon completion was immediately hired by St. Michaels University School as Head of the Art Department.

In the early 1990s, Alan created a high school competitive cycling league, inspiring young local riders, many of whom continue riding to this day, and some of whom went on to become National and World competitors and champions. Alan also continued his own love of competitive cycling, both road and mountain. Alan, David, and Michael spent many happy, adventurous summers racing throughout BC and western United States. He was his sons’ steadfast mentor, coach, and mechanic as they went on to achieve their own success in cycling and life. Retiring from SMUS in 2008, Alan remained immersed in the world of cycling and later joined Oak Bay Bikes as a part-time bike mechanic.

Throughout their life together, Alan and Joanie manifested their committed partnership and love through their art, adventures, gardens, home, and dedication to family. Alan was delighted to become a grandfather and the adored “Popop” to his three grandchildren.

Alan’s artwork is enjoyed and hung in the homes of family, friends, and institutions around the world.  Alan described his big, beautiful, paintings as having many layers. This was how Alan himself could be described. One of those layers was as a member of a small art focus group with whom he generously shared his considerable insights. He brought quiet observation, pointed questions, respect for the process, and a deep understanding of the hard work of creating. His last works, small gouache paintings, have a powerful, simple, and singular radiance.

In January 2019, Alan was diagnosed with stage four Ampullary cancer, a rare form of pancreatic cancer. For over two-and-a-half years, Alan faced this cancer the way he lived his life: with grace, great perseverance, grit, courage, spiritual practice, and an enduring ability to perceive beauty and experience gratitude and joy. He passed away peacefully in Hospice, in the early morning of August 25, 2021, surrounded by Michael, David and Joanie: Team Jones.

Please use your video camera when joining so that family in attendance can see you and feel your support.

Due to COVID regulations and knowing that some attendees are at high risk for COVID, all who attend Alan’s memorial are asked to be vaccinated before attending, and to remain masked and adhere to social distancing requirements.