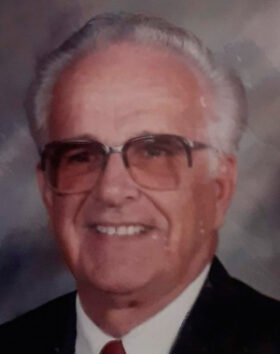 Albert passed away unexpectedly but in peace at Broadmead Veterans Memorial Lodge in Victoria, BC.

Albert was born to Jason and Elsie Fedosenko. He, with his 3 brothers and 2 sisters lived on their homestead in Alticane, Saskatchewan until the droughts of the 30s forced them to relocate to Ontario. They moved to Simcoe and the family re-established themselves on a farm there. As the siblings grew up, they began to live and work in the ‘big city’ of Toronto. They lived together in a small house, pooling their resources so they could help the folks with the costs of the family farm. Every weekend they would all pile into a car and head home to help out with the farm work.

In 1955, Albert married Christine Somerville. While still in Toronto, they were blessed with 2 children, Laurie and Ron. In 1967 they moved to Kelowna, B.C., where they were once again blessed with a third child, a daughter, Darlene.

Albert was a very talented and skilled man. He loved to minister in his church using his musical talents. He was a very accomplished singer. He was an amazing soloist, he and Christine sang together, he directed several choirs and loved to lead congregational singing. He was a talented Jack-of-all-trades and could do just about anything he set his mind to. He was a Certified Autobody Technician and worked at that trade several times in his life. He was a builder and built several homes for his family and others. He was a bricklayer, stone mason and stucco contractor and his handiwork is all over Kelowna. He was also a talented home renovator and he “spruced up” many homes, to then resell, and that was one of the ways he was able to improve his family’s home situation. He also did many home renovations for his daughter Laurie and her husband. Such a talented man!

Albert’s two great joys were family and church. Almost everything he did centered around those two things. He volunteered many hours to church activities and church remodeling and building. He helped to build, brick lay and stucco churches from Yellowknife, BC to Kelowna, BC and beyond. He was an unofficial family historian. He could keep track of family relations and relatives in his head better than anyone. He spent many hours every Sunday, calling family and extended relatives to keep in touch with them. Grandpa Albert also spent many joyful hours with his granddaughters Sabrina and Brianna while they were growing up and sharing the same home.

One of Albert’s only hobbies was travel. He loved to road trip! He loved to get in the truck and camper or later in his pickup and just go off to visit family. One of the biggest and greatest adventure trips he did was with his young children (aged 12, 10 and 6 at the time). They were gone for almost 2 months in the camper. They travelled across Canada to Ontario to visit family there, then they went down the East Coast of the U.S. They stopped in Alabama to visit his big brother Walter and his family and then they went to Florida, to Disney World and the Florida Keys. On the way home, the went along the Gulf of Mexico, thru Texas, New Mexico, and Arizona. They visited a cousin in Los Angeles, CA and then returned home along the West Coast! Needless to say, he instilled the travel bug in all of his children!

In 1977, Albert married Florence Lamming. She and her 3 daughters, Brenda, Rhonda, and Glenda came to blend a new family. Albert and Florence, to accommodate their large family, bought and renovated the house on Walburn Rd, taking it from “Carpenter’s Special” to a lovely home. Albert fancied himself a small-land farmer and now, with lots of helpers, was able to tend an almost acre garden, 11 walnut trees, cherry, plum, and apricot trees. In its heyday, it was a garden-like space and the hangout of many teenage friends of the family. A favourite winter pastime was skating on Belgo Pond with a bonfire and eating popcorn and pulled taffy on a Saturday night.

At the age of 64, he was diagnosed with stomach cancer. He beat that and lived for many years beyond in great health and vigor.

Missing him dearly are his children Laurie (Steve), Ron and Darlene. He will be greatly missed by his 7 grandchildren, 5 great-grandchildren, numerous nephews and nieces, extended family members and friends. He was pre-deceased by his brothers Dan and Walter and his sister Lydia.

A Celebration of Life for Albert Fedosenko is scheduled for Sunday, July 24, 2022 at 10:30 am in the Kelowna Seventh-day Adventist Church at 1130 Springfield Rd, Kelowna, B.C. There will be a private internment of his ashes on July 22, 2022.

God took the strength of a mountain & the majesty of a tree.
The warmth of a summer sun, the calm of a quiet sea.
The generous soul of nature & the comforting arm of night.
The wisdom of the ages and the power of the eagle’s flight.
The joy of a morning in spring & the faith of a mustard seed,
The patience of eternity & the depth of a family need.
Then God combined these qualities.
When there was nothing more to add,
He knew His masterpiece was complete…and so…
He called it …”Dad!”