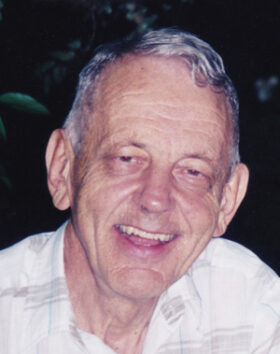 Passed away on December 10, 2021 in Victoria, BC, aged 89 years. Fred was born on April 28, 1932 in Christchurch, New Zealand. Predeceased by his wife Cathreen and son Martin (Linnea), Fred is survived by daughters Ann (Hugo) and Wendy (Chris), grandchildren Raphaella (Adrian), James and Alexander, brother John and nephews Mark and Brent (Pam).

Fred came of hardy and adventurous stock. His father, also Fred, went to sea as a ship’s carpenter and became a gold miner near Nome, Alaska, eventually returning to gold dredging in New Zealand in his forties. Mother Mary emigrated from Scotland to New Zealand by herself at age 22. After a bout with polio, young Fred was sent to a Roman Catholic convent school in Christchurch, where his academic promise was so evident that he was kept on as a scholarship pupil. He graduated as Dux of St. Bede’s College in Christchurch in 1949, with a University of New Zealand National Entrance Scholarship.

At Canterbury University College Fred was Senior Scholar in chemistry in his B.Sc. graduating year, 1953, and while completing his M.Sc. in 1955 he obtained a lecturing appointment in the chemistry department. On the strength of this, Fred and Cathreen married in 1955 and welcomed daughters Ann in 1956 and Wendy in 1958.

In 1960, Fred completed his Ph.D. in organic chemistry and was awarded a post-doctoral research fellowship at the California Institute of Technology. Not deterred by US/NZ double taxation, the little family subsisted on a shoestring and delighted in their American adventure. Son Martin was born in 1962, after the family’s return to New Zealand. A few years later, following a sabbatical year in 1966-67 at the University of Sussex, UK on a Nuffield Fellowship, Fred was attracted by opportunities overseas. In January, 1969 he joined the University of Victoria as a full Professor of Chemistry. 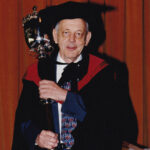 In family life, as at work, Fred could be blunt and decisive, but was also tender-hearted and generous. Martin’s death in 1984, of Hodgkin’s lymphoma at the age of 22 years, was a great blow. Fred stepped aside from academia and devoted himself to supporting Martin through that terrible time.

When Fred could tear himself away from the University, he enjoyed gardening with Cathreen, and walks with friends and family. He continued to be a voracious reader who could startle others with his knowledge of arcane facts. He plunged into geological research and provided logistical support for his brother John’s Yukon gold mining initiative in the 1990s. After retirement in 1997, Fred continued his involvement with the Pension Board at UVic and chaired a provincial committee to evaluate grant applications in science. Regular trips to New Zealand permitted Fred and Cathreen to escape northern hemisphere winters. Fred supported Cathreen’s interest in genealogy and replaced her in the kitchen. Both loved children and delighted in their role as grandparents which expanded to include two Victoria-born grandsons in the early 2000s.

When advancing Alzheimer’s disease forced Fred’s move into long term care in late 2020 his bedrock warmth, humour and humility endeared him to staff and fellow residents of The Kiwanis Pavilion. The family would like to thank the staff of unit 2B for their excellent care and kindness. Due to the pandemic, no memorial gathering is planned at the present time. Memorial donations are invited to either of the following: