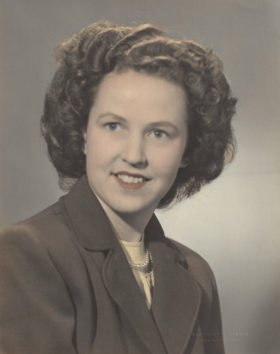 Lavone passed peacefully after suffering a stroke, on May 14th, 2020 at the Victoria General Hospital. Lavone was predeceased by her loving husband Evan Luke (Larry) Thomas, and her brothers Glen, Earl, Gordon, and Ronald. She is survived by her sister Ruby Olmstead (Beck), daughter Judy, son Dale Peebles, stepchildren Shelly and Larry Jr.

Lavone and Larry are deeply loved and missed by their Grandchildren Lana, Ryan, Colin, Michael, Meghan, and Gavin. Birthdays and holidays were also celebrated with an astonishing 11 Great Grandchildren. Lavone was the fourth of six children born to Ethel and Chester Beck, American immigrants from Kansas.

The Beck family moved to Pine Lake Alberta in 1930 and lived in a log home that still stands. Her family worked hard on the land during the start of the Depression. She learned about gardening at an early age and her love of horticulture and nature continued until the end. Even though times were hard, Lavone, her brothers and “twin” sister lived a rather enchanted life on the lake in rural Alberta.

Stories were told of sneaking away from chores to skinny dip with her sister Ruby, or of the family pet owl named “Pete” that would hitch a ride on her bicycle handle bars. A world war began, and her parents enrolled both Beck sisters into the Prairie Bible Institute for safe keeping while the war raged. After the war was over, she worked for the T. Eaton Co. and was a proud member of their company baseball team.

In 1949, Lavone married her first husband Donald Peebles, who at the time was a member of a popular local band – The Peebles Orchestra. They eventually bought a farm south of Pine Lake, and in 1959 had their son Dale. In 1962 their daughter Judy arrived on the scene. They farmed the land for another 10 years. They sold the homestead and moved to Victoria BC in 1969. In 1979 Lavone and Donald separated. Lavone sold the family acreage in Saanich and moved into Spencer Castle condominiums.

Several years passed until she met ‘Evan’ Larry Thomas, a retired naval officer, and World War II veteran. Their adventures began in earnest.  Lavone and Larry were wed in March 1984. They spent several years in Victoria turning into snowbirds, flying south for the winter, later moved to Arbutus Ridge Estates. They became golf cart driving instructors for all their grandkids. The years went by and their final move was to Berwick Royal Oak Retirement community.

Lavone and Larry loved people, were social butterflies and the life of the party. They spent many happy years together at Berwick with family and friends. Thanks for all the pub nights! Sadly, Larry passed away in October 2016. Lavone remained an active part of their community and kept her sun decks always full of her beloved plants and hummingbirds.

Lavone gave us all unconditional love. Her spirit, strength, and goodness will be with us in our hearts forever. An amazing woman, and an amazing life. A heartfelt thank you to the doctors and nurses of the Neuroscience ward in VGH for their compassionate care.

A Celebration of Life for Lavone will be held at a later date for family members (TBA). In lieu of flowers, tributes if desired, may be made to the Canadian Heart and Stroke Foundation: #106-1001 Cloverdale Ave, Victoria, BC, V8X 4C9    https://www.heartandstroke.ca/