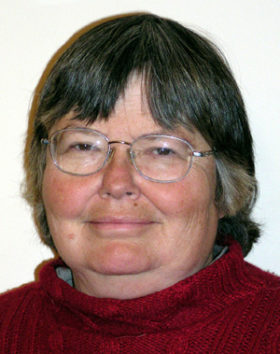 A trail-blazing reporter, a dedicated coroner, an avid ornithologist, a Girl Guide leader, and a lover of cats and horses, “McTick” died in Victoria Hospice on December 29 from complications due to thyroid cancer, with close friends by her side. She was 68.

Barbara Jean McLintock was born in Regina, grew up in the Winnipeg suburb of Fort Garry, earned a degree in psychology at the University of Winnipeg, and headed west the day after her graduation.

At age 22, she got a job covering the BC legislature for the Province newspaper, and two years later, was acclaimed as both the youngest-ever, and the first woman, to be President of the Press Gallery. She was promoted to Victoria Bureau Chief in 1974, and three years later, was lured away to become editor of the Victoria Times.

When the Times and the Daily Colonist merged, Barb moved east to work in the Southam News Bureau in Ottawa before being hired back by The Province as Victoria Bureau Chief in 1982 — a position which she held until her retirement due to corporate down-sizing in 2003.

While a reporter, Barb wrote two books: “Anorexia’s Fallen Angel: The Untold Story of Peggy Claude-Pierre and the Controversial Montreux Clinic”, and “Smoke-Free”, which detailed how Victoria became the first city in Canada to effectively ban smoking in indoor public places.

Within months of retiring, Barb was hired as the first Legislative reporter for TheTyee.ca, and also did some freelance work, including fill-in talk show hosting on C-FAX 1070 Radio.

Barb became a part-time Community Coroner in 2004, a full-time Coroner in 2006, and then in 2011, became spokesperson for the BC Coroners Service, a position which she held until her retirement from full-time in 2017.

You can read much more about her legendary and award-winning exploits in superb articles by Tom Hawthorn for TheTyee.ca, by Richard Watts at TimesColonist.com, and by Mike Smyth in TheProvince.com, among others.

In her spare time, Barb was an avid birder, a Girl Guide leader, a member of the Getting’ Higher Choir, a collector of juvenile horse fiction, a lover of cats and horses, and a dedicated dressage rider.

In 2002, Barb was named an Honourary Citizen by the City of Victoria, for her extensive volunteer work with groups including the Boys and Girls Club and the CRD Traffic Safety Commission. In 2004, the Victoria YM/YWCA named her a “Woman of Distinction”.

Special thanks to Victoria Hospice staff and volunteers for their care and compassion during Barb’s short time there.

In lieu of flowers, donations would be gratefully accepted by Broken Promises Animal Rescue (BrokenPromisesRescue.com, 2834 Sooke Road, Victoria, BC V9B 4J9) and/or by Victoria Hospice (VictoriaHospice.org).

Memories of Barb can be shared below.