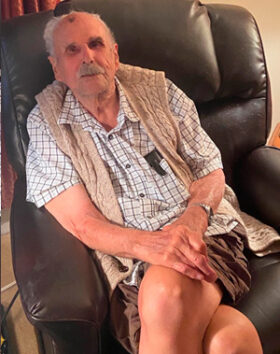 Bernard grew up in Oak Bay and attended Monterey Elementary School and Oak Bay High School.  While in high school, he reached his height of six feet five inches and towered over his classmates who gave him his nickname, Tiny.  He became accustomed to this nickname and, for the rest of his life, referred to himself as Tiny.  After high school, Tiny served his machinist apprenticeship at the Inverness Cannery on the Skeena River which was operated by J.H. Todd & Company.  After completing his apprenticeship, he returned to Victoria and worked at a cannery in Esquimalt.  Afterwards, he began working at a welding and machine shop in Langford which he eventually purchased.  Tiny owned and ran this business, Empire Welding, for approximately fifty years.  During this time, he became very well known in the community for his ability to build and repair almost anything constructed of metal.

After retirement, Tiny discovered golf and played frequently until he turned ninety.  He also drove until he turned ninety.  During his retirement years, Tiny became an avid collector of everything from B.C. chauffeur badges, to First Nations masks, to miscellaneous items produced by Victoria merchants.  He had the largest collection of B.C. chauffeur badges in the province.

Tiny was an enthusiastic raconteur, often mixing fact with fiction to enhance the entertainment value of his stories.  He and Marion hosted many memorable parties at their waterfront home in Sooke.  Both of them were fond of a glass or two of scotch.  After Marion passed away in 2007, he sold his Sooke property and bought a house in Oak Bay near to where he grew up.

Over the last several years as he started to slow down, Tiny was fortunate to receive assistance from Care & Company, enabling him to stay in his home.  Eventually, he required round the clock assistance and all his caregivers were wonderful.  Particular thanks to his main caregiver, Shirley who went above and beyond in her care of Tiny and who was with him when he passed away.

Not only tall in stature, Tiny’s presence and personality were larger than life.  He will be profoundly missed.

A small graveside service was held on July 18, 2022, with family and some of Tiny’s friends attending.  The family requests that you remember Tiny by toasting him with a glass of scotch or any other beverage that you enjoy.