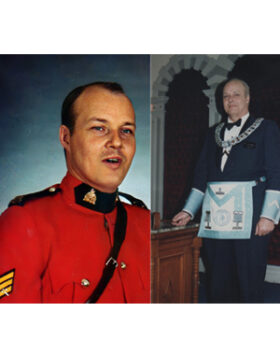 Calvin was born in Nepawa MB. Upon his father’s return from the war in England, the family settled back in Richmond BC where Cal and his younger brother David grew up.

Cal joined the RCMP out of high school and served until his retirement in 1986. While stationed in Saskatchewan, he met Twila Marshall from Manson MB. After marrying in 1966, they were blessed with four children: Bryan, Brent, Lisa and Lynn. His postings in telecommunications took the family to several communities over the years, including Yellowknife, Edmonton and Prince Albert.

Cal and Twila moved to Victoria in 1986, closer to his extended family and to the beloved mountains and sea of his childhood. He enjoyed sailing, home computing, ropework and hammock making and Sudoku puzzles.

As a Mason, Cal was an active member of the Haida Lodge for many years. He greatly enjoyed the study, ceremonies, friendships and community service work with his brethren. He was very sorry to have to step back when he felt his declining health was starting to impede his ability to contribute.

Cal and Twila enjoyed 52 years of marriage before her passing in 2018. His own declining health led to Cal coming to reside at Mount St Mary’s Hospital this past April.

Cal enjoyed good company, good humour and good music a good deal. He will be deeply missed by his family and all who had the pleasure to know him.

A Memorial Service was held on Wednesday, October 12, 2022 at 2:00 pm in the Sequoia Centre at McCall Gardens, 4665 Falaise Drive, Victoria, BC with Canon Andrew E. Gates officiating.  Reception to follow.

Condolences may be offered to the family below. To view service recording click arrow below.