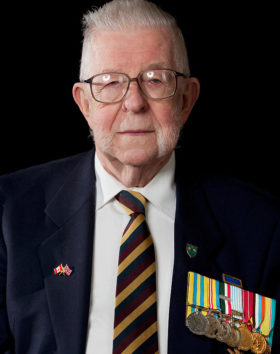 Ken Robertson passed away peacefully on July 24, 2020 at the age of 92. Born November 7, 1927 in Victoria, BC to Malcolm and Hazel Robertson, Ken lived his early childhood years on Nootka Island and then in Vancouver.  His teenage years were spent commercial fishing on the coast in the summers.  During this time, he developed a keen interest in forestry, which remained a passion for the rest of his life. On completing his schooling, he joined the Princess Patricia’s Canadian Light Infantry and was on active duty from 1945 to 1960, serving on the Imjin River front in the Korean War in 1951, NATO in Germany in 1953-55, and various locations in Canada. He received a Certificate of Distinction for his service.

Ken met and married Dorothy (Hayes) in Calgary in 1953.   Following the completion of his years of military service, Dorothy and Ken returned to Victoria to raise a family.  He built a successful stamp business, specializing in British Commonwealth stamps, then ventured into forestry land management.  His later years saw him happily active in his managed forests where he worked daily, often in an excavator, until his mid 80’s. In 2008 he earned a long-term forestry award for his commitment to small scale forestry and innovation.

Ken had a strong work ethic, unwavering values and believed that anything worth doing, was worth doing well.  He instilled this work ethic in his children.  He was incredibly innovative and resourceful, always looking for the next challenge.  He had an intense love of travel.  Most of all he was a loving husband, proud father, grandfather and great grandfather.  A man who was respected and admired by all who knew him.

He is survived by his wife, Dorothy, and his three children: daughter, Patricia (John) of North Vancouver, BC, son Warren (Sheena) of Victoria, BC, and son Blair (Nancy) of Victoria, BC, grandchildren Ryan (Sarah), Sean (Dalila), Lauren (Ben), Callum, and Arran and great-grandchildren Katerina, Isabella, Olivia and Hayes.

The family is planning a private celebration of life.  Thank you to the staff at Berwick Royal Oak for their care and compassion.

“We will hear you in the tall trees dear Dad and feel your love in the gentle breeze. We will love you forever and always.”