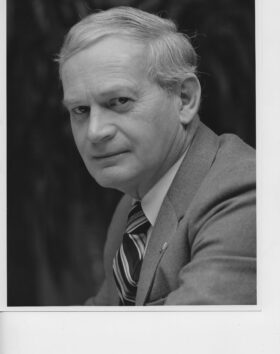 Chris passed away peacefully at the age of 90 in the early hours of November 8, 2021, with loving wife, Adele at his side.  Born in 1931 to a longtime Victoria family, Chris was the fifth and youngest child of Laurence and Grace Woodward.  He is survived by wife, Adele and daughters, Kara Woodward (Philip Williams) and Hilary Woodward (John Cain) and grandchildren, Isabel, Rhys, Grace and Maeve.  He is also survived by brother Frank Woodward and sisters, Connie Roberts and Felicity Morgan and numerous nieces and nephews.  He is predeceased by his parents and sister Faith Reimer.

Married to Adele in 1955, they spent 66 years together raising their family and enjoying their grandchildren and many beloved cats through the years.

Chris will be remembered by his family as a fun and loving father and grandfather. He will also be remembered also by his many friends and colleagues at the Ministry of Municipal Affairs where he spent his 40 year career in the service of the Province of BC, starting in 1949 and ultimately retiring as deputy minister in 1988. In that time, Chris was instrumental in the incorporation and restructuring of numerous municipalities and regional districts and was well known and highly regarded by both local and provincial elected officials. Chris was honoured with a life membership in the Union of BC Municipalities on his retirement. Chris will also be remembered for his interest in British sports cars, his love of gardening and ability to fix almost anything.

The family would like to recognize and thank the staff at the Heights at Mt. View, particularly on Cook West, for their loving care and kindness to Chris.

No service by request.  A family gathering will be held in the near future to remember Chris.