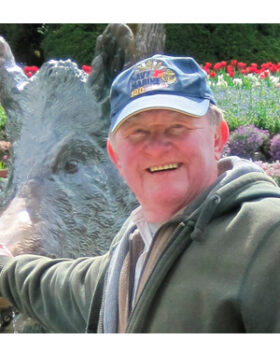 Cyril “Newf” Barnes passed away the morning of April 26th, 2022 in Victoria, BC at the age of 81.
He is survived by his daughter Shelley, son-in-law Jason, brother Andy, and sister Marilyn. Cyril was predeceased by his brother, Carl and sister Ada. He will be missed by his love Ann and his many friends from the neighbourhood, the Navy, the Queen’s Own Rifles Association and the Newfoundland Club.

Cyril was born in Harbour Mille, Newfoundland on August 12th, 1940. He joined the Canadian Armed Forces in 1961 where he served 11 years in the Army and another 24 years in the Navy. After retiring from the Navy he enjoyed a second career cooking for the folks at North Park Manor. Over the years Cyril was an active member of the Newfoundland Club of Victoria. You could often find Cyril spending time along the Gorge waterway.

A Celebration of Life will be held at the Langford Legion on Thursday, May 5th at 1:00 pm. Cyril will be interred at God’s Acre veterans’ cemetery.

The family wishes to thank the doctors and nurses who cared for Cyril over the last several years, especially Dr. Troughton, Dr. Yip and the nurses of the Saanich Health unit.

In lieu of flowers, donations can be made to the Heart & Stroke foundation.