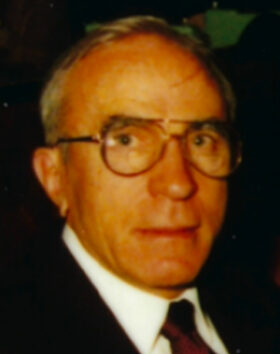 Our beloved husband and father went to be with Our Lord on November 11, 2022 after a long battle with vascular dementia. Born and raised in northern Ontario, Donald left school very early and went to work in hunting, fishing, and logging camps. At age 17 he began working as a locomotive fireman- shoveling coal into the firebox of steam locomotives – and continued to work for C.N.R. for 40 years.

Don was a member of the Brotherhood of Locomotive Engineers, formerly a member of the Freemasons, a Worthy Patron of the Order of the Eastern Star, an adherent of Christian Science, and a member of Alcoholics Anonymous with 64 years continuous sobriety.

He is survived by his loving wife of 65 years Virginia, his son Andrew, a brother Murray, and sister-in-law Donna. Donald was predeceased by his parents Murray and Grace; brothers Floyd, Maurice, Ronald, Wallace and Laverne; sister Irene; and infant son Norman.

For many decades a friend of those suffering from homelessness, Donald wished donations in his memory to be made to any cause helping the homeless including Our Place, 919 Pandora Avenue, Victoria B.C. V8V 3P4.

Funeral will be held at a later date.

The family would like to thank all Don’s caregivers at Glenwarren Lodge for the kindness and patience they showed our loved one over the last 2 years of his life. You gave him some of his dignity back and allowed him to come to terms with his illness. God Bless you.