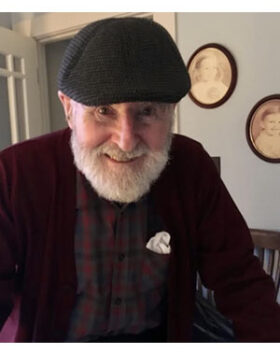 LCdr (Ret) Donald John Wand died peacefully in Victoria, BC on June 24th 2021 at the age of 95.  Don is survived by his children Kelly and Jonathan, granddaughters Zoe and Zaaven, and great-grandchildren Emmett and Avery Grace.  He will be greatly missed by his family, his devoted team of caregivers, his neighbours and many friends.

Born March 5, 1926, Don was raised in Essex, UK.  WWII intervened and his family was relocated to Harrogate in 1939.  His ambition from the start of the war was to join the Navy; as he was yet too young he entered the Sea Cadet Corps.  He enrolled as a CW candidate in 1943 and was sent to Glasgow University for Naval studies, where he read in Political Economy and Geography.  His naval career began in April 1944; after demobilization in 1947, he retained a strong desire to follow the sea, and was able to be recalled with the outbreak of the Korean War.

He attested into the Royal Canadian Navy in 1953 and his first posting was to HMCS Stadacona in Halifax, the city where he would meet his wife Shelagh (nee Maloney) and establish many lifelong friendships.  Don and Shelagh moved to Oak Bay in 1969 during his posting to the Naden Fleet School. He retired from the Navy in 1971, and subsequent careers with Merrill Lynch and CMHC concluded with his second retirement in 1988.

In his adopted city of Victoria, Don was an active member of the community.  He served on the board of the Vancouver Island Multiple Sclerosis Society for twenty years and served as President for three.

He was an enthusiastic member of the Saanich Sommeliers for over 30 years, winning numerous trophies and awards.  He loved being a winemaker and sharing his wine with delighted friends. Don also spent many happy summers at Seabreeze Lodge on Hornby Island with family and friends from Victoria, Vancouver, and Vernon. Later in life, he responded again to the call of the sea, cruising with Shelagh to exotic destinations.

The family would like to express our deepest appreciation to Don’s team of caregivers, and his friends and neighbours in Oak Bay.  We extend a special thanks to Claudia for her exceptional care and devotion to both our mother and father over the last decade.  With everyone’s support, Don succeeded in his goal to live comfortably and independently at home, maintaining the observance of 4 o’ clock tea until days before his passing.

A funeral service will be celebrated in memory of Don on Saturday, July 31, 2021, at 3:30 pm in the Sequoia Centre at McCall Gardens, 4665 Falaise Dr. Victoria BC, with a reception following the service. In lieu of flowers, memorial donations may be made to the Canadian MS Society, Parkinson Society British Columbia, or the Victoria Hospice & Palliative Care Foundation.  Condolences may be offered to the family below.