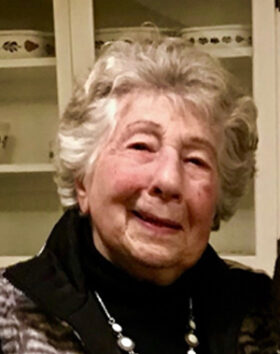 Born in Hanna, Alberta to Norman and Hannah Knott, Doreen married Charlie MacDonell and moved with him to Grande Prairie, Alberta in 1952 where they began their new lives, he as a lawyer and she as a homemaker, legal secretary and mother. Doreen was a cub leader, lifelong Liberal, a musician, attended one of Canada’s longest running book clubs, gardened, sang in choirs and supported local artists. Doreen lived in Grande Prairie until moving to Victoria in 2017. She travelled extensively after Charlie’s death in 1989 leaving little of the globe uncovered. When at home she golfed, worked as an enumerator, supported many local charities, played bridge and spent many happy hours with her numerous friends.

Doreen died (she insisted on not passing away) surrounded by her children and grandchildren, all of whom came to say their goodbyes. Many thanks to the staff at the Royal Jubilee Hospital 5th floor South who helped make Doreen’s last days comfortable and her family welcome. Thank you to Dr.Tim McKay who went over and above to provide excellent medical care to Doreen.

Doreen is survived by her children, Norm (Lisa), Sandy (Karin), Elizabeth Ann, and Mhairi (Paul). As well, she leaves her grandchildren – Julie, Anna, Greg, Caitlin, Tanya, Robin, Danika, Amy and James. She leaves her only sister, Wanda and Wanda’s children and grandchildren. Doreen also leaves her extended family, George, Tania, Emily and William. She was able to say goodbye to a few of her friends and family members, but unfortunately could not say her farewells to all of her many loved ones. Doreen left her friends and family reluctantly, she sincerely thought she would live forever and was a little surprised to hear that her very full life was coming to a close. She accepted the news gracefully, commencing to say her goodbyes and reminding us to rescue her gold teeth when the time came.

If you would like to honour Doreen’s memory, in lieu of flowers, please consider a contribution to Odyssey House in Grande Prairie (odysseyhouse.ca).  Condolences may be offered to the family below.