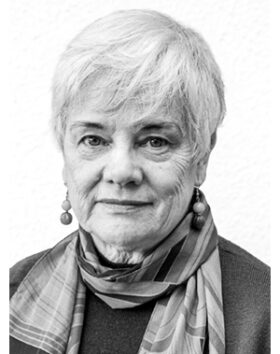 Born 17 March 1939 in Indian Head Saskatchewan, passed away peacefully on 19 November 2022 in Victoria, British Columbia with family at her side.

Mary-Wynne Ashford, MD, PhD., retired Family and Palliative Care Physician in Victoria, BC, and retired Associate Professor at the University of Victoria, was adamant that the physician’s role went far beyond their caring for individual patients. She believed that advocating for peace and the elimination of nuclear weapons was part of a doctor’s “duty of care”.

For 37 years Mary-Wynne wrote about and spoke internationally about peace and disarmament. She was Co-President of International Physicians for the Prevention of Nuclear War (IPPNW) from 1998-2002, which won the Nobel Peace Prize in 1985, and President of the Canadian Physicians for the Prevention of Nuclear War from 1988-1990. She led two IPPNW delegations to North Korea in 1999 and 2000. Her award-winning book, Enough Blood Shed: 101 Solutions to Violence, Terror, and War, has been translated into Japanese and Korean. She won many awards including the Queen’s Medal on two occasions, the Gandhi Prize in 1997, the Award of Excellence from Doctors of BC in 2019 and, with Dr. Jonathan Down, the 2019 Distinguished Achievement Award from the Canadians for a Nuclear Weapons Convention. She recognized the vital role of women as peace activists and in 2018 joined twelve hundred women from around the world to walk across the Reunification Bridge to a peace park in the DMZ between North and South Korea. In 2021 she developed and taught an online course, Global Solutions for Peace, Equality, and Sustainability sponsored by Next Gen U and IPPNW Canada. She nurtured an extensive network of international connections and her ability to form strong relationships was a hallmark feature of her character.

Born the third of four children to Jack Moar (a bush pilot, inventor, and entrepreneur) and Kitty Moar (a writer, teacher, artist and community organizer), Mary-Wynne inherited a sense of boundless energy, optimism and the belief that she had no limits. She was clever, confident, and connected with people in a deep and meaningful way. At the University of Alberta, she earned a BSc in Home Economics and a B.Ed. In 1981 she graduated from the University of Calgary as a Doctor of Medicine and in 1997 she earned her PhD in Education from Simon Fraser University.

She married the late Dr David Ashford and was the mother of three (Karen, Graham and Patrick). As a volunteer with the Calgary Zoo, she was foster mother to two baby orangutangs and a polar bear cub, capturing the activity of those years in a regular column for the Calgary Herald titled “Out of My Tree”. Before enrolling in medical school, she studied music theory, singing, French language, creative writing, and Shakespearean Theatre. After completing her medical training and moving to Victoria, she married Dr Russell Davidson, adding four stepchildren (Katyann, Victoria, Gillian, and Emma) to the warm circle of family. She was grandmother to ten grandchildren.

A passion for the arts infused her life. She performed in many drama and theatre productions and her involvement in the Gettin’ Higher Choir and the Community Choir Leadership Training program continued until her death. She was renowned for her sewing skills, especially her hand-crafted puppets. Recently she created puppets representing famous female social activists for the University of Victoria Faculty of Education and several special therapy puppets used to assist Syrian refugee children to be able to tell their stories and settle more easily in Canada.

For decades, Mary Wynne collaborated with members of the Baháʼí Faith on issues of global peace and prosperity and the advancement of women. In 2008 she formally joined the Baháʼí Faith and was an active member of the community, serving on institutions and promoting the teachings, particularly those which elaborated on aspects of world peace and global governance.

Mary-Wynne never lost hope that the world would one day be nuclear weapons-free. She was one of the most inspirational and influential leaders of our time.

A small funeral service will be held on November 25th and a celebration of Mary-Wynne’s life will be held on December 5th at the McPherson Playhouse in Victoria, BC. Details to follow at marywynneashford.ca, where condolences may also be shared. In lieu of flowers, the family asks that friends contribute to a noble cause in her honour.