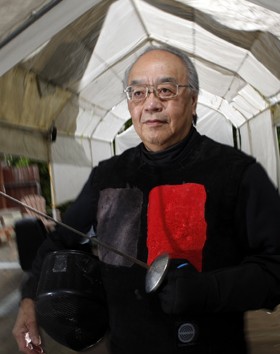 Dr. Nan-Sang Ho died on Saturday, August 22, 2015, in Victoria, BC. He was 79. He was born in Changsha, China, on December 2, 1935, during a period of wars and revolution and these events led to his father’s death while Nan-Sang was young. Later, he lived in Taiwan and Hong Kong. He survived tuberculosis and became an accomplished gymnast, specializing in the parallel bars. He earned a black belt in judo and developed an interest in the sport of fencing, which would become a major passion in his life.

He came to Canada in the mid-1960s and earned a PhD in physics from the University of Toronto.  At a fencing tournament in London, ON, he met Veronika Hoppenworth, who was travelling the world after leaving her home in Germany. They married in Toronto in 1968 and started a family. In 1980/81, they moved to Victoria, where Nan-Sang taught physics at Royal Roads Military College.

Upon his arrival in Victoria, he and Veronika established and maintained many fencing programs, including those at the University of Victoria, the YM/YWCA, and various recreational centres. For more than 30 years, he taught fencing on a volunteer basis to thousands of people in the community and for the past 15, he even provided daily lessons at his home in Oak Bay. He helped many students achieve strong competitive careers and coached one to the 2012 Olympics. He also remained a competitive fencer well into his sixties, participating in tournaments across Canada and internationally.

He was a larger-than-life and unforgettable personality and a beloved son and father. He dedicated many years to caring for his ailing mother, who came to live in Victoria until she passed away in 1998. Nan-Sang also studied constantly, voraciously throughout his life, subjects ranging from Chinese philosophy and medicine to neuroscience and quantum physics -anything that caught his interest and stimulated his considerable intellect.

He is survived by his wife, Veronika, and sons, Christopher and Oliver.

A memorial reception will be held on Wednesday, September 2, from noon to 2 p.m. at McCall Bros. Family Centre, Johnson and Vancouver Streets. Condolences may be offered to the family below.