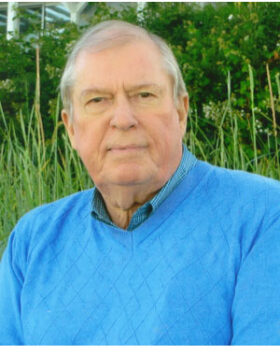 It is with great sadness we announce the passing of Richard Nuttall at the Royal Jubilee Hospital, Victoria, B.C. at the age of 81. After living 12 years with myelodysplastic anemia (MDS) he passed away surrounded by love and good care.

He will be remembered as a gentle, kind soul, caring and compassionate, devoted and supportive to his family. An avid reader, ever engaged in world and community issues. A respected physician, valued colleague, and mentor to many. He enjoyed being a life-long student, completing numerous degrees, earning his last at the age of 72.

Born and raised in Hamilton, Ontario he went on to graduate from the Ontario Agricultural College, Guelph, Ontario, 1961, specializing in Agricultural Economics. Rick’s interest in agriculture remained strong during his life, weaving throughout his many endeavors. He received an MBA from Harvard University, then went into Canadian Foreign Service where he worked as a diplomat posted to Ghana in 1964. As a young man, this was a treasured and exciting time but the lure of studying medicine led him to the Royal College of Physicians and Surgeons in Dublin, Ireland, graduating with the 1974 class. He kept in touch with classmates and was overjoyed to attend the 45th reunion.

Returning to Canada, he worked in Ontario at the Ottawa Civic Hospital and in South River before joining the Medical Services Branch of Health Canada, initially posted to Prince Rupert, B.C. and then Edmonton, AB. At this point, he built a company where he combined and applied his business and medical expertise to a variety of innovative ventures. This was an adventurous time for many years.

For the remainder of his career, which spanned decades, Rick worked in clinical and administrative medicine, for Health Canada in Yellowknife, NWT, in Public Health as Medical Director in Regina, SK, with the Vancouver Island Health Authority, and in Victoria as a General Practitioner on Fairfield Road in Victoria, and Medical Director at Mount St. Mary’s Hospital and Broadmead Lodge. Rick was recognized in his chosen profession and was proud of his initiatives, including bringing medical care to remote, Indigenous and under-serviced communities. He was honoured to receive recognition for Care of the Elderly from the College of Family Physicians of Canada (2016). His medical career spanned 44 years, retiring at age 78.

During these years he completed his Master of Clinical Science, Western University, Fellowship in Family Medicine (F.C.F.P.), Master of Public Health James Cook University, and Master of Agriculture, Colorado State University. In addition, he was a long-time member of the Canadian Public Health Association, and President of the Association in NWT.

After his son’s death serving in Afghanistan, Rick became a vocal advocate for soldiers and veterans, especially in Victoria, where he led the effort to establish the B.C. Afghanistan Memorial.

He enjoyed his work, time and friendships at Cordova Bay United Church. Rick was a dedicated volunteer and supporter of For The Love Of Africa Society, playing a key role in the establishment and operation of a Medical Clinic in Dodoma, Tanzania.

Above all, Rick cherished family the most, often noting pride in his children and beloved wife.

He deeply appreciated the medical staff that cared for him over the years, especially the Royal Jubilee Hospital Medical Day Care Unit. Rick would say he was now a combination of every man and woman after receiving so many blood transfusions.

Donations in his memory can be made to the charity of your choice.

Due to constraints around COVID-19, a private funeral service was held on Thursday, June 3rd, 2021, in the Sequoia Centre at McCall Gardens.  Click on the image below to watch the service.

Condolences may be offered to the family at the link below.