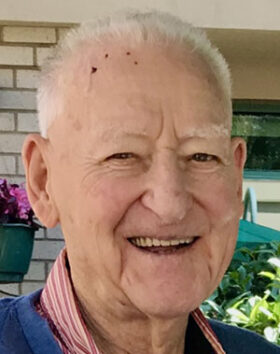 Ted passed away peacefully at the Broadmead’s Veterans Memorial Lodge in Victoria with his children by his side. Ted was predeceased by his wife, Janet, and survived by his children, Gerry (Nancy), Gail, Cathy (Dave), Rosemary, and Joan (Jay); grandchildren, Brendan (Nadia), Karen (Ryan), David, Michael (Charlotte), Alan (Jennifer), Heather (Jen), Anne, Jason (Jane), and Ted (Meghan); 9 great-grandchildren; many cousins, nieces and nephews; and sister, Carol.

Ted grew up in Cumberland in the beautiful Comox Valley on Vancouver Island. He loved the area, spending as much time as possible outdoors – camping, hiking, swimming, fishing, and skating were just a few of his favourite activities. He also loved music and was an excellent singer, often asked to sing solos in church throughout his youth. By the time Ted reached high school the world was at war so after graduating, at the age of 18, he enlisted in the Royal Canadian Air Force and completed his pilot training in Alberta, Scotland and Yorkshire. Ted flew 36 successful missions as the pilot of a Lancaster bomber during the war, including critical bombings to clear the path on D-Day. For the most part missions were flown at night making the already dangerous job even more treacherous. For his actions he was awarded the Distinguished Flying Cross in the fall of 1944. Seventy five years later, in the fall of 2019, he was awarded the French Legion of Honour Medal in recognition of his efforts supporting the liberation of France.

After the war ended, Ted enrolled at UBC to become a Professional Forester. With his love of trees and the natural world this was the perfect career choice. However, an even more important pursuit, namely Miss Janet Isenor, took precedence. Ted and Janet were married on June 28, 1946. The newlyweds moved to the married student housing at Little Mountain in Vancouver where their first two children were born. After Ted graduated from UBC the young family moved to Victoria where Ted signed on with the BC Forest Service. The family soon grew to include five children.

Ted lived a full and happy life. He accomplished so much and was, and continues to be, an inspiration to all his family and friends. He was a much-loved son, brother, husband, father, grandfather, and great-grandfather who will be remembered for his positive “just get it done” attitude, his generosity, and his bravery – to name just a few of his wonderful attributes. But most importantly, he will be remembered for his everlasting love and support for his family.

Thank you to the wonderful care team at Broadmead’s Veterans Memorial Lodge – Ted loved you and thought you were all amazing.