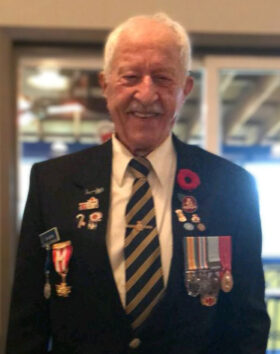 It is with heavy hearts that we announce the passing of a wonderful man on October 2, 2020.  He is predeceased by his father in 1955, and mother in 1989.  Dad was loved by many and was known for his generous character, kindness towards all, great storytelling abilities, keen sense of humour, a history buff, and had strong family values. Dad was born in Victoria in 1931 and was close to his grandmother, grandfather, cousins, aunts, uncles, adoring mother and stoic father.  Family picnics at Cordova Bay were the highlight of his youth and he often reminisced about those days at the beach –  the innocence of a by-gone era was reflected in his fondness for Laurel and Hardy movies and the art of Norman Rockwell. The 1940’s and 1950’s brought hobbies of cars at Western Speedway, motorcycles, instruments, music, and dances at the McMorran’s Beach House in Cordova Bay with his cousins and friends.

Dad was an honourable man who joined the Forces in Vancouver BC in 1950 and served with the 81 Field Regiment Royal Canadian Artillery.  He did basic training in Victoria before going to CFB Comox and then shipping out to Korea.  He returned to Victoria and retired from the army in 1956.  Dad also served the Airforce from 1964 – 1975, temporarily in the Coastguard 1975 – 1991 on ships Camsel, Racer, Ready, and Rider in the engine rooms. He drove for various truck transport companies and was known on CB radio as “Black Bart”. His final job was as Commissionaire from 1992 until he retired in 1997.

When he married our Mom in 1965 Dad took his role as a Father figure seriously to 5 step-children and had 2 daughters of his own – Vicki and Sandra.  When the marriage ended, his commitment to us remained strong making efforts every weekend, often driving for hours, to keep those lines of communication open as we grew.  His strong family virtues were the glue that kept the family close.  He was admired by many including his daughters, son-in-laws, 5 grandchildren, and was blessed with 3 great-grandchildren. His love of nature brought him to Lake Cowichan where he resided since 1988.  His love of country music had him play in bands at dances around the town and the OAP Hall.

Coming from a family of military history, Remembrance Days had a special place in his heart – marching with comrades, participating in the ceremonies at schools, and the assurance that his children and grandchildren knew the sacrifices made for their freedoms.  He acquired many friends along the way being a member of the Korea Veterans Association and the Royal Canadian Legion leaving an empty spot in all our lives.  Many thanks to the neighbours, many friends, Gordon and Karen Croft, Dr. Postuk, support and hospital staff, and Pastor Ernie Gray who helped Dad on his journey.  We greatly appreciate your care and support during the difficult times.  Rest in peace with the Saviour, Dad.  Until we meet again. 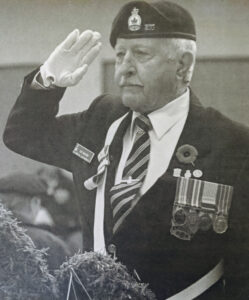