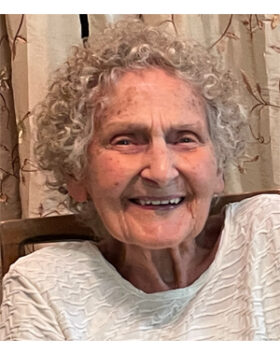 In 1960 the family embarked on an adventure when Don joined the First Western Bank of California. The family resided in San Francisco, San Marino, and then settled into Long Beach.  Tragically Elsie’s life was turned upside down when Don died on Nov 11th, 1963.  She decided to move the family back to Canada, to Burks Falls, Ontario where Don’s family lived.  It was a lovely small-town existence, but in 1967 she decided to move the family to Ottawa to be near her sister Helen.  As the children grew up and went on to live their own lives Elsie decided in 1982 that she had had enough with the cold snowy Ottawa winters and returned to Victoria to again be closer to her sister Helen.  She lived in Victoria until 2019 and her final years were spent with her youngest son Paul and his partner Monica Foster in Crofton, BC.

Elsie was an amazing woman and she had a sharp wit, and a loving smile.  She could and would start a conversation with anyone, whether in  the park, walking down the street or in a grocery store.  She was both mother and father to her children and the best grandmother—from tea parties to exploration walks, she had all the time in the world for her grandchildren and was always there for graduations, performances, recitals, and skating events.  She enthusiastically taught them how to roller skate, play cards, throw darts and play video games!  Elsie was an avid (and wicked!) bridge player and loved to go to the casino to play the nickel slots.

Elsie was the final member of her generation on both the Gray and Darling sides of the family.  She was predeceased by her husband Donald, her sisters Helen and Molly and her brother Denis Henry (Harry), and by Doris, Peter and Stan Darling.  She lost her youngest son Paul Scarlett Darling in July of 2022.

Elsie always said that life was not fair, and you had to make the best hand with the cards you were dealt and lived all her 100 years to the fullest, with no regrets and nothing left undone.  She leaves behind her son Christopher Darling (Roslyn), daughter Kathleen Anne Redding (Michael), and daughter in law Monica Foster. She will be lovingly remembered by her granddaughters Emily Darling and Katlyn Redding, and grandson Mitchell Redding.

Elsie was a delightful, generous, kind and loving lady who will be missed by all who had the good fortune to have known her.