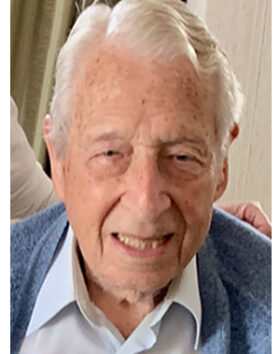 Embert was born in 1922 in The Netherlands. He immigrated to Canada with his first wife, Judy, in 1953.   He had a remarkable career in health care, as a family physician, medical administrator and palliative care physician in Victoria, Vancouver and Montreal.  His life was centered on his love of his family and commitment to his catholic faith.  He was known for service to the sick and his community.

Embert was predeceased by Judy (1981) and second wife, Lies (2021), his son Embert Jr, and his daughter Anne Castner.  He is lovingly remembered and mourned by his daughter and son-in-law, Monica and Doug Storey of Calgary, grandchildren Nicola and Philip Storey, Emily Yakashiro (wife of Philip), Jennifer and Kathleen Castner, and their father, Paul. He is also mourned by Lies’ family, Kate, Ken, Seamus, Megan and Molly Ryan-Lloyd.  He will be fondly remembered by his extended family in the Netherlands, and many friends.

Embert died two days after his 100th birthday family celebration.  A Funeral Mass will be held on Saturday October 15, 2022, at 11:00 am, at St Patrick’s Catholic Church, Oak Bay.  There will also be a Celebration of Life in 2023 (tba).  In lieu of flowers, we appreciate a donation in Embert’s name to Mount St Mary or to Doctors without Borders.