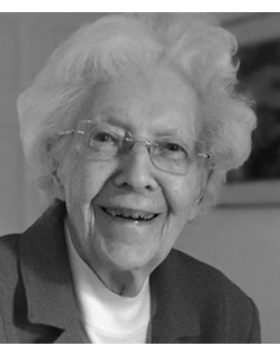 It is with sadness that we announce the passing of Mrs. Eunice O’Byrne-Tuttle (née Martman).  Eunice passed away at the Kiwanis Pavilion in Victoria BC at the age of 97 years on March 12, 2020.  Eunice was predeceased by her first husband, Gerald O’Byrne (1984) and her second husband, the Very Reverend Dr. George Tuttle (2012). She was also predeceased by her eldest son, Robert O’Byrne (1994), Robert’s children Yvonne (1990), Kelly (1998) as well as her daughter in law, Lorelei O’Byrne (2010).  She is survived by her family Joanne O’Byrne (Robert), Roy O’Byrne (Jeanne), Dave O’Byrne (Lorelei), Patrick O’Byrne (Angela) and Jason O’Byrne (Laura) and her grandchildren and great-grandchildren.

Eunice had a long teaching career in Saskatchewan starting in 1941 until her retirement in 1984.  She touched many lives in this career.  She relocated to Sidney, British Columbia in 1986 and lived in the Greater Victoria area until her passing.  Eunice’s family would like to extend a sincere thank you to Maria Serpa’s loving support for Eunice and the staff at the Kiwanis Pavilion, especially the kind staff in unit 3C, for taking such good care of Eunice during her final years.

Arrangements for a memorial will be made at a later date. Donations, in lieu of other tributes, may be made to the Kiwanis Pavilion, 3034 Cedar Hill Rd, Victoria, BC V8T 3J3.