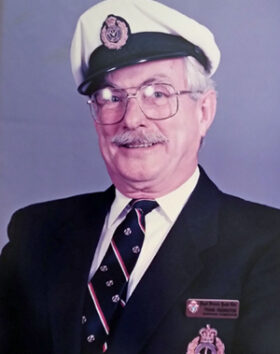 After a life lived to the full, Frank passed peacefully in his sleep in the early morning of August 29, 2021 at Victoria General Hospital.  Predeceased by sister Dorothy Booth (John) and first wife Maureen (McGraw), he is survived by loving wife Doreen Marsh, sister Elizabeth Nethercott (Norman), and son Keith (Randie Feil).

Born in Portsmouth, England, Frank met his first wife Maureen during the war; they married in 1948.  In 1953 they emigrated to Canada, and – after an adventurous cross-country trip in a car that barely made it – settled in Victoria for life.  They soon became stalwart members of the Royal Victoria Yacht Club, and before you knew it Frank had become Commodore for a two-year term.  As race chairman, he then successfully guided the Swiftsure yacht race through its massive expansion during the 1970s and early 1980s before becoming Club Commodore for a second two-year run.  In 1980 he was awarded the RVYC’s highest honour, Honorary Life Membership.  All of this was wrapped around a rewarding civilian career at DND Esquimalt.

After Maureen’s passing in 1982, Frank met and married the love of his life, Doreen Marsh, and after retirement they shared many wonderful journeys and travels both on the seas and over them.  For many years their green-hulled sailboat “Knotsure” was a familiar sight in local waters; meanwhile, Frank and Doreen also became a familiar sight on the deck of many a cruise liner.  Between all this came travels to dozens of different countries including Turkey, Greece, Australia, Italy, Spain, numerous South Pacific islands, all parts of the Caribbean, and of course the UK many times to visit friends and relations there.  Frank also travelled widely through Canada and the USA, accompanying Doreen on journeys to the many dog shows at which she was a judge.

Subject to covid regulations, a celebration of Frank’s life will be held at the Royal Victoria Yacht Club, 3475 Ripon Rd., on Friday, October 8, 2021 at 1:30 p.m.  In lieu of flowers, please give generously to the BC Marine Parks Forever Society.  Condolences may be offered to the family below.