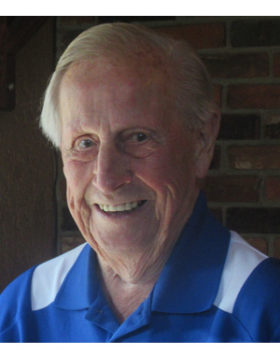 It is with deep sadness we announce the passing of our dad and poppa at the Royal Jubilee Hospital on January 27, 2020 with his loving daughter, Cherlynn and son-in-law, Rob by his side. Whitey was predeceased by his beautiful bride of 64 years, Betty-May. Whitey is survived by his daughter, Cherlynn (Rob) and grandchildren, Erik and Hayley. When it came to his family dad was a man filled with pride and never failed to show us how much he loved, supported and believed in us!

Whitey was born in New Westminster and became passionate about playing lacrosse at a young age and went on to have an extensive lacrosse career which included playing for the Victoria Shamrocks from 1951 to 1963. Highlights of dad’s lacrosse career included becoming an Honoured Member of the Canadian Lacrosse Hall of Fame in 1970 and he was inducted into the Greater Victoria Sports Hall of Fame in 2012.

One of the most prestigious honours bestowed upon dad was having the Shamrocks retire his No. 8 jersey and hang his No. 8 from the rafters at the Q Centre.

Dad’s career highlights include becoming a Victoria Firefighter in 1953 and retiring as Deputy Fire Chief in 1985. Dad also gave back to his community in so many ways. He served as a Saanich alderman from 1972 to 1979 and a Victoria City alderman in 1987. Whitey was also one of the original co-owners of the Monkey Tree Pub. As well, dad was an instrumental member of the bid committee that landed Victoria the 1994 Commonwealth Games.

Thank you to Dr. Marie Skinnider for her years of medical care provided to dad.

In lieu of flowers, please consider a donation to a charity of your choice.

Due to the current Covid19 outbreak we are postponing Whitey’s Celebration of Life until further notice. When our world is healthy again we will look forward to having the opportunity to commemorate and celebrate Whitey’s well-lived life”.