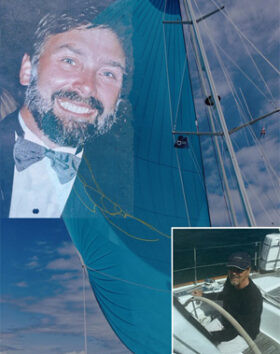 Gary Edward John Steinhoff died on February 26, 2022 at home, in the arms of his loving wife, Carolann.

Gary was born in Kitchener, Ontario, on April 6th , 1949 to Leighton and Lorraine Steinhoff. While still completing his surgical residency in Ottawa, he travelled to Victoria to visit his lifelong friend, Doug, and fell in love with the sea. He decided to set up his practice in Victoria and soon afterward commissioned the building of a new C&C 40 sailing yacht at Niagara-on-the-Lake. He moved aboard soon after Gleneagle arrived in Victoria and spent many happy years living aboard and sailing the west coast whenever he was not in the office or operating room. He met Carolann and they were engaged after three dates and married a few months later in 1984. They travelled the world together, on land, visiting pretty well every country on the planet, and at sea, chartering sailboats and sailing the Bahamas, the British Virgin Islands, New Zealand and the coast of Turkey. Eight years ago, they decided to have their dream boat built in England, an Oyster 475, which they named Aquilina (Sea Eagle).

Gary was a dedicated and respected urologist with a practice that spanned 34 years serving the Victoria community and beyond. He was a deeply caring and compassionate physician to his patients and their families. He was a member of the Medical Advisory Board, Canadian Interstitial Cystitis Society, Chairman of Urology Quality Assurance Committee, Vancouver Island Health Authority, Member, Credential Committee for Canadian Urology Research Consortium, Consultant, Victoria Fertility Center, Clinical Assistant Professor, Department of Surgery at the University of British Columbia, Clinical Associate Professor, Department of Urologic Sciences at the University of British Columbia, Urology Surgical Tumour Group Chair, Surgical Oncology Network Tumour Group at BC Cancer Agency & served as Chief of Urology, Vancouver Island Health Authority, for 24 years. In addition to chairing many other medical boards too numerous to include herein, he was Principal Investigator for over 87 clinical research trials.

In 2000, Gary and Dr. Charles Ludgate together founded the Island Prostate Center in Victoria in order to provide much needed support and education and care to prostate cancer patients and their families. The IPC is still thriving today.

In addition to Carolann, Gary is survived by his sister Debbie (Tsuyoshi Hasegawa),many nieces, nephews and cousins. Special thanks to close friends Doug and Lars, for their constant companionship and support during his illness.

A gathering to pay tribute to this wonderful man will be scheduled at a later date at the Royal Victoria Yacht Club.

I really don’t know why it is that all of us are so committed to the sea, except I think it’s because in addition to the fact that the sea changes, and the light changes, and ships change, it’s because we all came from the sea. And it is an interesting biological fact that all of us have in our veins the exact same percentage of salt in our blood that exists in the ocean, and, therefore, we have salt in our blood, in our sweat, in our tears. We are tied to the ocean. And when we go back to the sea – whether it is to sail or to watch it – we are going back from whence we came. –John F. Kennedy.

When he shall die,

Take him and cut him out in little stars,

And he will make the face of heaven so fine

That all the world will be in love with night

And pay no worship to the garish sun. -William Shakespeare.