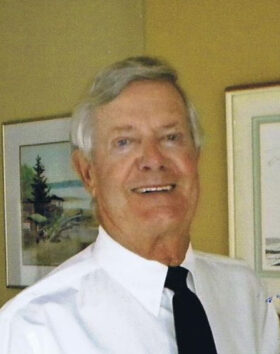 Gary passed away peacefully on August 31, 2020 at Mount St. Mary’s Care Home in Victoria, BC. He was born in Boissevain, Manitoba on October 2, 1933, the youngest of nine children of Eveyleen Shillington (nee Garvin) and Andrew Merrill Shillington, all predeceased.

At age 16, Gary moved to Honeymoon Bay on Vancouver Island to work in the logging business (green chain) with his older brother Jack. This was a short-lived experience that sent him back to Regina vowing to never have to work that hard again! On his return to the prairies, he met Ingrid (nee Wittich) and settled down to raise two children, Jo Ann and Don. True to his word, Gary’s next career endeavour was physically less demanding as a journeyman printer/typesetter for the Leader Post in Regina and from there progressed through to pharmaceutical rep, banking and financial advisor. His outgoing nature and love of people lead to success in all his endeavours and many of his professional colleagues became life-long personal friends.

While Gary and Ingrid raised their family, they spent their summers at Shore Acres Beach on Long Lake in Saskatchewan swimming and sailing. There were always lively parties and Gary would entertain the group, playing his guitar and singing all the old folk standards. During the winter they played badminton at the Wascana Winter Club in Regina where Gary was a director. But his true love was tennis which he started playing when he was 16 and became a well-known member of the Civil Service & Regina Tennis Clubs. He continued to enjoy the sport with Ingrid as his partner until his late 70’s. In 1973 Gary and Ingrid moved to Victoria, BC to escape the prairie winters. Their children and many of their friends from the prairies soon followed. True to form, Gary and Ingrid joined the Racquet Club of Victoria where Gary served on the Board of Directors for many years, made many friends and enjoyed regular play with a broad cross-section of the Victoria tennis community. Gary loved boating and kept his old Bayliner at the Oak Bay Marina for over 20 years, making many trips to the San Juan Islands. Another love was a yearly 2 week stint at Yellowpoint Lodge that started in 1974 and continued to 2015. Along with winter vacations to the sun, Gary and Ingrid enjoyed the best of times together.

Gary is survived by his loving wife Ingrid, daughter Jo Ann (Gordon Gamble), son Don, grandchildren Jaime, Courtney (Darren Nielssen), Roni and Paul and great-grandchildren Tessa, Emma, Kylan and Ethan. Gary was a member of the Seventh Day Adventist Church where he served as Deacon for many years.

Special thanks are due to the staff at the James Bay Lodge and Mount St. Mary’s Care Home where Gary has resided for the past year. A special note of appreciation is due to Dr. Herb Domke for his support to our family during the past year.

Due to COVID, there will not be any service held at this time. Gary suffered from Alzheimer’s for the past 5 years. In lieu of flowers, we would encourage donations to the Alzheimer’s Society to help fight this devastating disease.