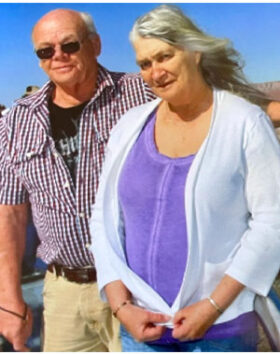 It is with unbearable sadness that we announce the sudden unexpected passing of George William Hamilton July 17th, 2021 at his Recreation Property in Shawnigan & Muriel Darlene Hamilton December 21st, 2020 at her Care Home. Both will be immensely missed by their children Gordon Hamilton and Tamara Iocchelli (Husband Dan Iocchelli) and grandchildren Cheyenne Iocchelli and Tyler Iocchelli. George leaves behind his Sister Eleanor Powell who was always in his thoughts and Nephew Graham and Birdie who they were hoping to meet. Darlene leaves behind her brother Bob Calder and Nephew Adam who they missed spending time with, as the past year has made it impossible for families to be together. Although Thankyou to Adam who made those visits to George as soon as it was allowed. He really enjoyed them.

George and Darlene were a huge part of their children, grandchildren’s and grand animals’ lives. They put everything aside to be there for them. Darlene put her whole later life on hold to be there for her grandchildren so they would be safe and well cared for while their parents were at work while George did everything, he could to spoil them. They attended all their Granddaughter’s Band Concerts and other functions. Mostly all of their Grandson’s sports games no matter where they were on the island even when he was in 4 different sports at a time. They went as far as driving to California to see him in a Lacrosse Tournament. Darlene would even be able to always spot her grandson on the court, field or rink once he started to run even with her advanced Alzheimer’s. When he wasn’t running, she enjoyed a good game of where is Tyler. As well as always brightening up at the sight of her granddaughter who would always drop in for a visit on her way to College and University. They were so loved by their Grandchildren and Children.

They have left many wonderful long-time friends like Brian who George worked for too many years to count and considered a wonderful boss and great friend. Which may be the reason he kept coming out of retirement to work again.

Great long-time friends like Stan & Ditty who George have known since his school years and have been there for him since Darlene’s passing. Jim (George’s best walking buddy) & Judy, John & Sandra, Len & Sylvia. They were all very much appreciated by George and Darlene. As well as many from their recreational spot in Shawnigan where they loved to spend summers and weekends. This is where George in his younger years was always spotted wearing his cowboy boots with shorts. His children were always mortified but happy to say he gave up part of that look. It was still one of their fond childhood memories.

With George’s passing being so very much unexpected we know he would have been so upset that he missed his walk the next morning with his good friend Jim. He so enjoyed those walks with Jim. It was something he always looked forward to, always a new adventure. It got him through Darlene’s stay at a care home and her passing. At least they got to hang out the evening of. As well as the hikes, walks and dinners with his son Gordie who followed in his footsteps to become a heavy-duty mechanic. The weekday walks with his granddaughter Cheyenne, daughter and Peanut. George would also be very upset he missed the rest of his grandson Tyler’s Junior Lacrosse season. That he waited forever for. At least he got to see a game hours before he passed.

At 77 George never slowed down. Between all his walks he had about 10 projects on the go and only missed completing about 2. In between his always putting others first and not accepting help for himself. We will very much miss him.

We do believe he would be proud though; he did die with his boots on. With pants not shorts. Both George and Darlene were adamant of no funeral service. They just did not want that kind of extra attention.

If you so chose donations may be made to the Alzheimer’s Society, Heart and Stroke Foundation or an Animal Rescue.