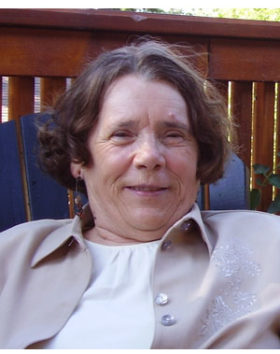 Gerlinde Albert was born in the Rhineland region of Germany in a small village called Erfenbach near the city of Kaiserslautern in 1933. As a child, she experienced many of the challenges associated with war, including the bombing raids of 1943-1945. After meeting her first husband, Charles Tolman, in 1955,  they would marry in 1956 and eventually settle in Seattle in 1957 where Charles completed his PhD at Washington State University in 1962. They moved to Victoria in 1964 when Charles was offered a position in the Psychology department at UVIC. After their divorce in 1974, Gerlinde raised 4 kids while completing her first degree in History in 1977, and earned her 2nd degree in Social Work in 1981. She married Neil Jones that same year and they were together until his death in 2012. Throughout the 1980’s and 90’s she worked as a counsellor specializing in cross cultural and family counselling. After retiring from counselling she volunteered at the Salvation Army until she was 85 years old in 2018. From 2012 to 2020 she lived very happily and independently in the Tuscany Village condo complex (Gordon Head) where she became very well known by the local community there. She will be remembered for her compassion, love and years of service in helping those who faced challenges related to poverty or cultural transitions. She is survived by her 4 children Richard (and partner Arlene), Jeannette (and husband Jeff),  Peter,  Eric (and wife Debra), her stepchildren Ralph (and wife Jennifer), Sheri, and grandchildren Hannah, Robin, Madeline, Sadie and Daniel. We all Love you and will always miss you. In lieu of flowers, please consider making a donation in memory of Gerlinde Albert (Jones) to the Salvation Army.