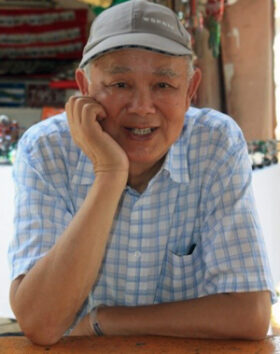 The only son in a family of nine children, Kwing Kow “Henry” Chow grew up in Panyu Village, a rural area just outside Guangzhou.   It was a time of financial and political hardship, but his parents persevered, driven by strong family values, vigor, and personal sacrifice.  Sent overseas in 1953 for an opportunity in BC’s Gold Mountain, like many others, Kwing Kow took on the same challenge – to overcome adversity and provide for the family back home.  Now, part of his legacy is that his siblings, their children and grandchildren all have successful lives in various places such as New Zealand, Hong Kong, the US, and Canada.

Victoria, BC was the entry point for immigrants then, which resulted in the oldest Chinatown in North America.  Race, language, and youth were all barriers to success, but assisted by local clan members, Kwing Kow found work in Chinatown at Golden City Restaurant as a baker.  In 1958, he partnered and mentored under Mr. Lee to turn the Embassy Café from a local diner into a Chinese/Western restaurant.

Also in 1958, Kwing Kow – now ‘Henry’ after attending the local North Ward School – married Yu Chui Tim (‘Maureen’).  They raised 3 children together, Ken (Joanne), Julie (Rick) and Wendy (Steven), and Embassy Café officially became a Mom and Pop operation in 1969 when Mr. Lee retired.  It was a popular place for coffee, weekly Western dinner specials and an assortment of Western and Chinese pastries.  It eventually became an important part of Chinatown, serving as a popular gathering spot for its local ‘regulars’ who would come to socialize and partake in their favourite Embassy offerings.  They made many friends and Henry was an active member in a number of local Chinese societies volunteering in various administrative roles.  In 1991, Henry sold the business after they had made a living there for 32 years.

For the next 30 years, Henry enjoyed a second act in retirement.  In his own quiet, fun-loving way, together with Maureen, he spoiled their 7 grandchildren, (Kara, Lindsay, Jenna, Timothy, Geena, Colin & Jonathan), tended to his gardens, practiced Chinese calligraphy, wrote poems, raised songbirds, volunteered and socialized in Chinatown, and traveled around the world.  He especially enjoyed returning to Guangzhou – twice, in 1973 and 2009 – with his family to see the traces of his youth, and to impart the memories to the next generation.  And he was also able to attend the recent wedding celebrations of his granddaughters Kara (Daniel) and Lindsay (John).

Henry was and is much loved and cherished, especially by his family, but also by his many friends and neighbours.  In all of us, his personal values will live on:  responsibility, hard work, sacrifice, empathy and humility.

Ba/Yeh-Yeh/Goong-Goong, you will be in our hearts forever.

Due to Covid-19 restrictions, a private family service will be held to celebrate Henry’s life.  In lieu of flowers, donations can be made to The Canadian Red Cross https://www.redcross.ca/ in his memory.