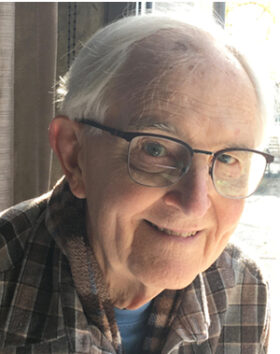 For livestream, go to:

Peacefully in the early morning of September 21, 2022, Herbert Allen Whitney passed away at home in Victoria, BC.

Herb was born on April 18, 1929 in Grand Rapids, Michigan to Marguerite Brummeler Whitney and Herbert C. Whitney and was the brother of Margaret (Marge) Hansen.

He was educated at DePauw University and the University of Michigan, where he received his PhD.

As a young man, he went to work in Tokyo, Japan for 3 years, with another 2 years added when he was drafted during the Korean War. He became reasonably fluent in Japanese and maintained a love and connection to Japan for the rest of his life that he shared with his family.

In 1957 he married Barbara Ann Cochran, who had been Marge’s college roommate and close friend. His marriage to Barb of 65 years was a model of kindness, fun, partnership and love that inspires their family.

Following their 3-month honeymoon in Japan (where Barb’s parents had to wire them additional money), they settled in Ann Arbor, Michigan and Herb completed his PhD.  After several years at Penn State University, in 1965 they moved with their 3 children to Waterloo, Ontario where Herb joined the faculty of Wilfrid Laurier University (Waterloo Lutheran University at the time) and taught geography for the next 30 years. His interests focused on cultural geography and how people interact with their landscape. He loved engaging with students, particularly on field trips to various places in Canada, and he made a particular point to show hospitality to international students.

Following his retirement, he volunteered for many years supporting people in the hospice program at Freeport Hospital, enjoying the people he met and finding their journeys meaningful.  He also sought to protect heritage buildings as an active member of the local branch of the Architectural Conservancy of Ontario.

Herb was an active member of the United Church of Canada. He read and reflected deeply on issues of faith and social justice, valuing community wherever he lived.

Herb and Barb had three children: Herbert Whitney Jr. (Marie), Carolyn Whitney-Brown (Geoffrey) and David Carter-Whitney (Maureen).  He and Barb raised their family valuing faith, inquiry, love and humour.   In 1973-74 they spent an amazing year living in Kobe, Japan, which shaped the family with a love of adventure and remains a cherished time.  Summers were spent visiting Barb’s parents and family on Cape Cod and with Herb’s mother and Marge’s family at Port Sheldon, Michigan at the family cottage. The extended family remained important to him throughout his life.

He continued to travel through professional opportunities and with Barb, visiting China in 1977 shortly after it opened to western visitors, as well as going to Korea, Hong Kong, again to Japan as well as Germany, the Netherlands, Britain and France.

Herb and Barb moved to Victoria, B.C. in their mid-80s, eventually moving into the Camelot, a seniors’ residence where he was known for making sure he knew everyone’s name and for sharing a joke at each meal.

He always loved gardening, shaping the yard in Waterloo with large, beautiful designs including a stone lantern he had brought back from Japan at the end of his military service. He continued to create lovely gardens on their balcony in Victoria, right through his final days.

A “foodie” before his time, he was always on the hunt for new and obscure items and particularly sought out sticky toffee pudding and salt-rising bread.

He took photographs throughout his life (sometimes to his family’s consternation as they waited, and waited), and leaves a legacy documenting beautiful places and a family that grew over the years, had fun, and apparently ate many, many meals together.

He particularly liked writing haiku poetry to concisely reflect on the beauty of nature as well as the joy and challenges of life, self-publishing two books in his final years.

The voices of Indigenous survivors of Canada’s residential school system made a significant impact on Herb and he sought to better understand how to support reconciliation and healing.

Donations in his memory may be made to James Bay United Church (www.jamesbayunited.com) or to the Indian Residential School Survivors Society (www.irsss.ca).