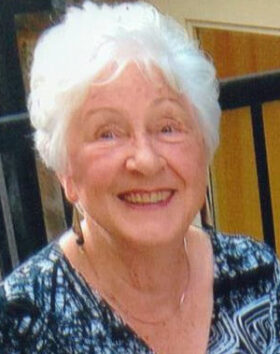 With heavy hearts, the family announce Jacquie died suddenly on January 11, 2022. (It was her wish that this announcement not use “passed” – an indication of her character and fierce desire to avoid euphemism.)

Jacquie was born on September 9, 1934 at Royal Jubilee Hospital, Victoria, the only child of John Arthur (d. 1942) and Dorothy Roberta MacDougall (nee Laing; later Holt); d. 1981). At the time, her father was serving as a guide on the Bedaux Canadian Subarctic Expedition. Born RH positive, to her mother that was RH negative, Jacquie was later told that her life depended on a recent graduate from Edinburgh who performed the life-saving blood transfusion.

Raised from age 6 months in Peace River area, Montney and Hudson’s Hope, her father John died tragically when she was 5, and she later gained her adopted father Joe Holt at age 8 when he and her mother married. She attended Victoria High School, graduating with Class of ’55. She then studied Library Science at University of Michigan, receiving her BA and AMLS; upon graduating, she worked in the university’s Undergraduate Library. While in Ann Arbor, met fellow Canadian Arthur Thomas Storey (d. 1998); soon after completion of his Ph.D., they married and later returned to Ontario. They raised four children: Eric Edwin, Ian Arthur (d. 1968), Patricia Ann (Graham), and Lynne Alison, and Jacquie has watched with pride her two grandchildren, Evan Farquhar and Ian Thomas, grow into accomplished young men. The family moved to Winnipeg, Manitoba in 1977, and Jacquie returned to Victoria in 1988. It was here that she met her companion Ron Telfer, and his children Robin, Andrew, and Gillian.

Jacquie was an active, longstanding member of the University Women’s Club in Canada (North York, Etobicoke, Winnipeg) and American Association of University Women before that. Beginning in Winnipeg and then in Victoria, she was active in the Canadian Institute of International Affairs (CIIA). She was dedicated to community volunteerism and in particular, her role as driver where she learned so much about her adoring clients, forming lasting friendships.

A proud Canadian, Jacquie enjoyed travelling all provinces in Canada as well as abroad (India, South-East Asia, Peru, Brazil, Ecuador, Colombia, Mexico, United States, England, Scotland, Ireland and eastern Europe at the time of Glasnost). She preferred the path less travelled, to immerse herself as a keen guest rather than tourist, interested in how people lived; she would connect directly, bypassing the language barrier with a warm smile. As much as she loved people, she would say she loved animals almost as much (and with a grin, “perhaps even more” – especially her horses in early years and later dogs, with whom she socialized on daily walks throughout the Oak Bay neighborhood).

She kept her northern BC pioneer spirit throughout her life, even as she enjoyed the sophisticated city life and her love for symphony and theatre. Her passion was ignited when she embraced her heritage through Scottish Country Dancing.

With the many friends she made around the world, she kept in touch with her handwritten letters that those fortunate to receive would enjoy as if she was present and conversing over a cup of tea.

The family wishes to acknowledge with heartfelt thanks the exceptional medical care provided by the team of outstanding health professionals at Royal Jubilee Hospital.

In accordance with her wishes, her cremated remains will be buried at Mountain View Cemetery in Revelstoke. Due to current gathering restrictions, a service has been deferred for later date. In lieu of flowers, donations may be made to any of her favoured causes: UNICEF, BC Children’s Hospital (Vancouver), Doctors Without Borders/Médecins Sans Frontières (MSF), or Children’s Health Foundation of Vancouver Island.