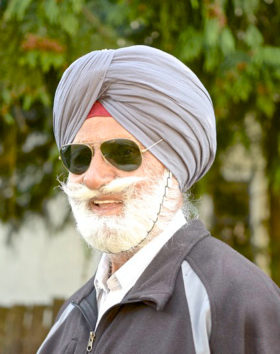 It is with great sadness that we announce that Jamiat Singh Bhela passed away on April 17, 2019 at 87 years old.  He was a beloved Father, Grandfather, Brother, Uncle and Friend and lived a wonderful life, constantly surrounded by family and friends.

Jamiat was one of nine children born to the late Buta Singh and the late Inder Kaur on December 24th, 1931 in Dalla, Jalandhar, Punjab, India.

In 1954, he married his beloved wife, the late Swaran Kaur and they had two beautiful children together (the late Baljinder Singh Saini-1958 and Gurbhupinder Singh Bhela-1964).

In 1951, he joined the Indian Airforce as a Trainee Airman and began his time in the service.  He eventually became an Aircraftsman (1952), Corporal (1956), Sergeant (1964), Flight Sergeant (1969), Warrant Officer (1974) and in 1977, he got commissioned as a Flying Officer in the Indian Air Force.  He loved his job all throughout his life and retired as an Assistant Deputy Director of Training Officers and Airmen of Non-Technical Branches in 1986 from Air Head Quarters Vayu Bhawan, New Delhi. He fought alongside India in two wars against Pakistan in 1965 and 1971.

Jamiat had a great passion for sports and education. He took part in many track and field competitions during his time in the air force, eventually holding an unbroken record of five years in throwing shotput, discuss, javelin and long jump across all service departments. He loved being active and maintained an active lifestyle until his last days with us. He strongly valued education and knew six languages (English, Punjabi, Hindi, Urdu, Farsi and Russian).

In 2007, Jamiat immigrated to Canada to join his youngest son, Gurbhupinder, his daughter-in-law, Kamaljeet and his granddaughter, Harpreet. While living in Canada, he loved going on walks and was constantly amazed by the beauty of nature. He went on daily walks and would meet with his friends at the park every morning.

During his last month, he was diagnosed with a metastatic cancer in his small bowel and fought as hard as he could. Our family wishes to express its immense gratitude to the internal medicine unit at the Royal Jubilee Hospital for doing everything they possibly could to find out what was making him so ill, the Canadian Red Cross for giving him all the equipment necessary needed to feel as comfortable as possible during his time of need and his family doctor, Dr. Leduc, for providing him with care throughout his time in Canada.

A Funeral Service followed by Cremation will be held from the Sequoia Centre at McCall Gardens, 4665 Falaise Drive on Friday, May 10, 2019 at 10:00am. For those who will not be able to attend but would like to share memories and thoughts of Jamiat, the service will be livestreamed and recorded to be viewed at a later time (see link below).

The service will be followed by Kirtan and Langar at the Khalsa Diwan Society Gurdwara on Topaz Street.