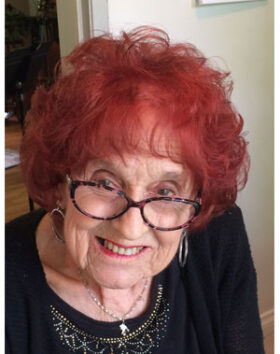 Jean was born in Winnipeg and grew up in the North End.  She was always proud of her Ukrainian heritage, and of her father Michael Lazeczko, an inventor, choral director and pioneering Ukrainian-Canadian pharmacist, her mother Mary, an accomplished amateur musician, and author sister, Maara Haas.

Jean graduated from Issac Newton High School, and then attended normal school to obtain her teaching certificate. Her life was spent mainly in Winnipeg, with stints in Vancouver and Montreal as she followed Wally on his various transfers within Air Canada.  Upon his retirement in 1978, they settled in Charleswood  but she continued to travel, standby and with a suitcase full of perogies, to visit family until just a few years ago.  She always loved the West Coast, and in 2017 she finally moved to Victoria to be closer to her daughter.

Jean was creative and artistic, and enjoyed playing the piano (and tap dancing!). She was good with numbers, and delighted in processing till tapes looking for overcharges.  She was so frugal that everything was re-purposed – used envelopes, Kleenex boxes, canned ham tins – and she was thrilled by coupons and “deals”. Jean wanted to be part of anything/everything that was happening. She had no fear, and often little patience. As a natural born teacher, she loved to find grammatical errors in newspapers and “solve” everyone’s problems. She used to joke that her headstone should read “I was only trying to help”.  Her family learned to dread the words “I’ve been thinking…”

Jean led a full and fun life, with a sense of adventure and an irrepressible spirit. Getting older hardly slowed her down.  As a senior she took swimming lessons and computer courses, and learned to dance on roller skates at the Winnipeg Roller Rink.  She was also a touch vain, and kept her hair coiffed and wore “what they’re wearing” until the very end.  Jean loved Elvis and Chopin, crosswords, bingo and scrabble, cats and the full Moon, Lucky Beer from the bottle, Chinese food and French fries, second hand stores, costume bling (especially earrings!) and animal print clothes. She DID NOT want to be remembered for her skill at making cabbage rolls and perogies — but she will be!

She touched many lives with her warmth, generosity and sense of humour. We will all miss her so much. Those who would like may wish to make a contribution to one of Jean’s charities. Jean supported so many, she left behind a 40-year supply of greeting cards and address labels. Her latest favourites were the SPCA and Operation Smile.

“See you later, alligator.  In a while, crocodile”

Condolences may be offered below.