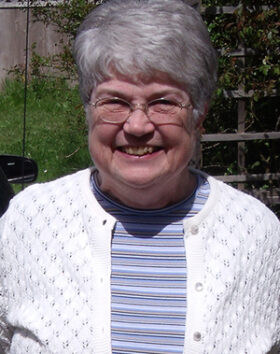 It is with great sadness that the family announces the passing, after a short illness, of Joan-Marie Cecilia Hammond (née Bawden) on Tuesday, September 28th, 2021, at the age of 79. Predeceased by her mother, Vera Bawden, and her father, Russell Bawden. Loving mother of Michael (Lixin) and John Hammond. Beloved grandmother of Stephanie and Kalan. Dear sister of Brian Bawden (Jill) and aunt of Drew (Daniela) and Andrea (Matias).

Joan-Marie was born in London, Ontario, on May 17th, 1942. Her father Russell was a member of the RCAF and, like many officers in the service, frequently moved from posting to posting, so Joan-Marie attended many different high schools. She then attended Lakeshore Teachers’ College in Toronto, graduating in 1963. Her first teaching position was at Canadian Martyrs’ school in Ottawa, then moved to the AVM Morfee School on the RCAF base at Rockcliffe. She met and married Hugh Hammond, an officer and navigator with the RCAF, in 1968. They moved to Sherwood Park, Alberta, shortly after, so Hugh could pursue a career with various private airlines. They bounced around for a while, and eventually settled in Ladysmith, BC, in 1979; two years later, they divorced, and Hugh ultimately moved back to his home province of Saskatchewan. Joan-Marie remained in Ladysmith for the next 40 years, entering assisted living in 2019, then long-term care in Victoria in 2020.

Joan-Marie faced much hardship over her life. Between frequent moves as a teenager, raising two boys as a single parent with limited local support, precarious finances, and recurrent health problems, she was nevertheless a resilient, resourceful person noted for her kindness, her warmth of spirit, and her depth of friendship. Everyone who crossed paths with Joan-Marie was the better for having had her in their lives. She will be greatly missed by all that knew her.

The family is having a viewing for Joan-Marie on Sunday, October 3rd, 2021, at McCall Gardens in Victoria from 10:00 to 11:00 am. She has requested cremation and her ashes will be spread in a private ceremony for the family on Tuesday, October 5th. In lieu of flowers, please consider a donation to Operation Smile or the Multiple Sclerosis Society of Canada, two charities that were near and dear to her heart.