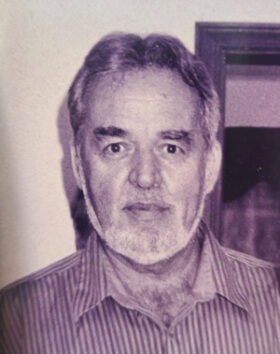 John Michael O’Brien (Mike) passed away Friday, July, 22, 2022, in his home surrounded by his family following an illness.

Mike was born in God’s Lake, Manitoba on May 29th, 1940. He spent 12 years in the Navy, during which time he married his wife Margaret in 1968. With the news of his first child, Christopher, he put in for his retirement from service, and 4 years later welcomed his daughter Erin into the world. He spent many years as a soccer coach with Bays United, and is to this day known as “Mr. O” by his team. He was also the first president of the Esquimalt Curling Club. After his retirement, he embarked on his favourite and most rewarding career – being a Grandpa, both to his own grandkids and to the kids of the neighborhood. His duties included teaching his grandkids to walk, picking them up from school, hosting sleepovers and being a short order cook. He was known to say that if he knew about the joys of being a grandparent earlier, he would have done that first. He spent many mornings making breakfast for his family, and many afternoons with his dogs in the park. He was a friend to anyone he might meet, and his radiant smile and infectious laughter will live on in his loved ones.

He is survived by his brother Terry, his cousins David and Gwen, his wife Margaret, his children Erin (Gord) and Christopher (Debra), his grandchildren Haley and Matthew, and his dogs, Tucker and Ted.

At his request, there will be no service. However, if you have a sudden urge for a cup of tea with fresh milk or a Hershey bar, remember him.”

Condolences may be offered to family below.