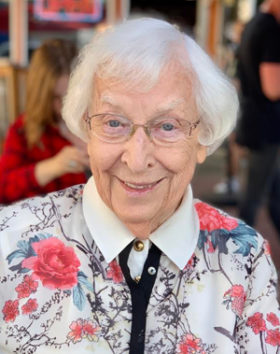 June was born in Motherwell, Scotland on July 21, 1928 and grew up in nearby Lanark. Mum’s family had a strong connection to Canada: her father John McKinley Hunter, along with his mother and siblings, farmed in Manitoba at the turn of the century. John enlisted in the Canadian Expeditionary Force during World War I. Injured on the battlefield, he was invalided out to Scotland, where he married June’s mother, Janet Capie.

Mum was evacuated with her mother and younger sister from Scotland to Canada during World War II, surviving the dangerous Atlantic crossing to live with cousins in Calgary. The family returned to Lanark before the end of the War to reunite with her father and brother, eluding the submarines a second time. She continued her high school education at Hamilton Academy and later attended the University of Glasgow, where she met our Dad, John Simpson while completing an MA. They married in 1952 and worked in London, where Mum entered the civil service as an Inspector of Factories, before embarking on the great adventure of their lives.

In 1952, they immigrated to Canada, living in Toronto and North Vancouver and then settling down in Victoria. Mum raised the family in Oak Bay, where she also spent many happy hours gardening, baking, reading, making close friends and enjoying life by the seaside. After Dad passed away, she moved to Sidney BC, where she volunteered at the museum, became a formidable Mahjong and Scrabble player, did her newspaper crossword every single day, and followed international politics avidly. She loved to walk the seawall in Sidney and could often be found on a park bench along the way.

Mum had an innate curiosity about the world and people and always made her mind up for herself. She was an independent thinker, and lived on her own terms, right to the end.

Mum is survived by her sons, John Hunter Simpson, and Alan Paterson Simpson and his partner Christine Rimmington, and her daughter Fiona Allison Foss and husband Alex Foss, and grandchildren Iain, James and Clare Foss.