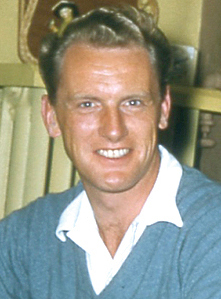 Our remarkable Dad died peacefully at 95, yet he still had the mind of someone years younger. Predeceased by his beloved wife, Joy, he is survived by his children: Kathy (Gord), Janet (Tej),

Dad grew up in Vancouver and spent summers at the seaside cottage in Selma Park just south of Sechelt. At 13, he was sent to Shawnigan Lake Boys School.  He enjoyed his time there learning to sail and competing in rowing.  After 3 years, Dad returned to Vancouver and attended Magee High School.  As a young man, Dad held numerous summer jobs: grocery bagger at Safeway; loader for a canning plant on railcars; longshoreman; taxi driver; and ship furniture maker.

Dad began studying at UBC after high school, but then joined the RCAF training as a rear tail gunner. He was disappointed not to get overseas as the air war had been won by late 1944.  Given the life expectancy of rear tail gunners, we are very grateful!  Dad returned to UBC and graduated with a Bachelor of Commerce and soon after became a Chartered Accountant. He joined the Provincial Government as an auditor and in 1958 was transferred to the Ministry of Finance where he eventually became Comptroller General.  In 1985, he retired as the Assistant Deputy Minister of the Revenue Division.

Dad met Mum, the love of his life, in 1956.  They married in Vancouver in 1957, and by 1964, they had 5 children.  Despite the number of us, they managed to make each one of us feel special and to have everything equal.  Mum and Dad were admittedly opposite personalities, yet they brought out the best in each other and lived incredible lives together in the Oak Bay family home they built in 1962.

Dad had a quick wit, a brilliant mind, and a generous spirit.  He was a voracious reader and could complete the TC cryptic crossword daily.  We are incredibly proud of how humble he was.  He had a quiet presence, but people never forgot him.  When he spoke, everyone listened.

Dad was initiated into the Mason’s Acacia Lodge No. 22 by his father, James Douglas.  His main involvement was with the Shriners, particularly the Janizaries Marching Unit, of which he was a founding member.  He served as drill captain for 5 years during which the unit successfully competed in several international competitions.  Dad also served as parade marshal.  You likely saw him leading the Shriners in the Victoria Day Parade.  Dad gave back to the community in many other ways: as a longtime treasurer of the Victoria Junior A Lacrosse team, member of the Eagles Lodge, member of the RCAF 800 Wing, and a lifetime member of the Pro Pats Legion.  One of the best examples of his commitment to others was coaching a soccer team that neither of his sons played on because they needed a coach.

Dad was a huge sports fan.  For years he crewed a sailboat racing in the Swiftsure; he was in his element being out on the ocean.  He loved watching soccer and his favourite Man United.  Mum and Dad supported their beloved Victoria Shamrocks as season ticket holders and devoted parents.  When Jim was traded to the New Westminster Salmonbellies, Mum cheered loudly for her son, but Dad would say, “I hope you play well in defeat”.

Mum and Dad were the ultimate hosts and had many memorable celebrations and spontaneous parties.  Whether it was the Shriners or parents from their kids’ teams, everyone knew Keith and Joy knew how to throw a party.  They enjoyed numerous cruises and trips around the world with the Shrine, with their favourite jazz bands, and with their grateful daughters.

As kids, we loved the road trips Dad would take us on.  He loved to drive and take us on vacation. We have fond memories of Winfield, Woods Lake, Cristina Lake, Hornby Island, California and Oregon.  We also delighted in two summers sailing around the Gulf and San Juan Islands.  In the later years, Dad loved trips to Palm Springs and the Okanagan.  It was our pleasure to see Dad happy.  He often surprised us with his choice of outings (Phantom of the Opera, World of Dance) and gloating over winning too many meat draws at the legion!

The family would like to thank Dr. Kevin Wylie and the caring staff at the RJH 8th Floor North.  We are also grateful to the caregivers at VanIsle Home Care for providing wonderful care for Dad and supporting us over the past few years so that Dad could stay in his home.

We like to think that Mum and Dad are reunited having a drink while listening to Dixieland Jazz!

A private family memorial has taken place.  Due to COVID-19, we regret that there will not be a celebration of life.