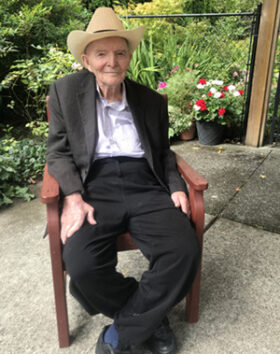 It is with a sad heart that I say goodbye to my father Ken Ferster, who passed away peacefully January 8, 2022 at the age of 99.  Ken was predeceased by his wife Ruth in 1994.  He is survived by his son Donald, sisters Ruth (Noel), Dorothy and June, and numerous nieces and nephews.

Ken was born in 1922 in Islay, Alberta, the third of seven children.  He grew up on a farm in an era when farms were small, families large, and tractors were gradually replacing horses.  Life during the Depression wasn’t easy.  After leaving the farm, Ken worked on the Alberta railways as a fireman of steam locomotives at the end of the coal-fired era.  Having an adventurous spirit, he made his way west, spending a winter on a trapline in northern BC, and felling trees with a crosscut saw at a logging camp near Chase.

Arriving in Victoria, Ken met Ruth and proposed to her three weeks later!  They were married in 1956.  Ken worked for Canadian Liquid Air for 30 years.  After retiring, he tended to a large garden, enjoyed fishing, and cut wood for his wood stove.  With their Boler trailer, Ken and Ruth travelled every summer to the BC interior and Alberta to visit relatives.  Ken was a loving and faithful caregiver to Ruth during her illness.  After her passing, he discovered a passion for dancing.  He spent several winters in Hawaii, where he enjoyed hiking in the mountains.

Ken found a new community of friends when he began attending the day program at Luther Court in 2008.  As dementia continued to progress, he moved into Luther Court in 2015 and was able to dance even more often with his favourite partner Vivienne.

A graveside service was held prior to interment at Royal Oak Burial Park, beside Ruth.  Those who wish to make a donation in memory of Ken may do so to Luther Court Society (www.luthercourt.org) or Victoria Hospitals Foundation (www.victoriahf.ca).