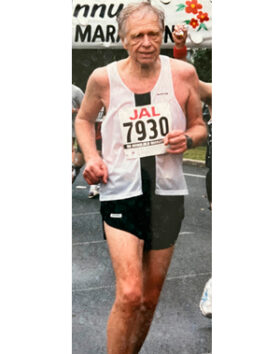 It is with great sadness that the family of Kenneth H. Arnott announce his peaceful passing on Tuesday May 10, 2022 at the age of 95 years.

Ken was born in Sheffield, England to (John & Gwendiline). He worked at Butterley Steel & Engineering in Ripley, Derbyshire while he studied for his Engineering Degree. It was there he met Evelyn who worked as a drafter. They were married in 1952 and emigrated to Canada shortly after.

After a few stops along the way, they ended up in Victoria, where Ken worked for the then Department of Highways as a Bridge Engineer. He retired in 1987 from the Government and went on to work as a Consulting Engineer into his 80’s.

As young kid’s we remember the many parties they had with their friends and workmates, dancing and singing in the downstairs English pub displaying his love of music and entertaining.

He took us to endless lessons, swimming, skating, tennis, gymnastics…., as well as coaching us and others in soccer and track and field.

He continued coaching soccer after his retirement and made many special friends along the way.

His love of running started around the age of 45 and continued until a few years ago.

He participated in many 5k, 10k and half marathons winning countless medals over the years. One of his proudest moments was going in the Senior Olympic Games in Tucson in 1997, where he was asked to carry the flame for a leg to the stadium. His biggest achievement was training for and completing the Honolulu Marathon in 1999 at the age of 73.

The family wishes to send a special thank you to the doctors, nurses, and staff at Sunrise of Victoria Care Home for their care and compassion.

In lieu of flowers, donate to your favorite charity, or just pass along a favorite memory of Ken.