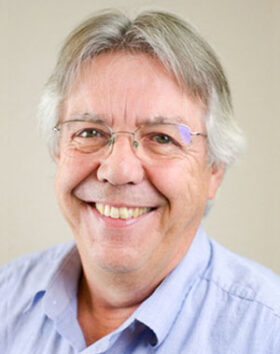 Leslie Stephen Biggs began life on March 14, 1953, at the Royal Jubilee Hospital in Victoria, and finished life on September 19, 2022 in the same building.  He was 69 and a half years old.

The third of Sid and Ruth’s six children, he was welcomed home at 4050 Carey Road to a house that Sid built with his own hands.  The growing family lived there until more space was needed, thereafter moving briefly to Margaret Street beside McKenzie School, and then to 1231 Palmer Rd. in the Lakehill Area.  It was here that Les would spend most of his formative years, graduating from Reynolds High School and then Uvic with a degree in Urban Geography.  During that time the whole family was involved at Westview Gospel Chapel, which shaped much of Les’ approach to life.

After graduating in 1975, Les ended up in Grande Prairie Alberta.  Together with brothers Stan and Jim, he worked in a plywood mill for the first summer, followed by a couple of odd jobs and then a one year stint at the Peace River Planning Commission. He met Carol at the plywood plant, and never let her go.  They were married in 1977.

Although trained in Urban Planning, Les never felt it was his calling in life. The pursuit of the Kingdom of God was where his heart was at, so he and Carol moved to Abbotsford in the fall of 1980 from where he could attend Regent College in Vancouver. Both of them were involved in Maranatha Baptist Church, with Les serving as assistant pastor.  He graduated from Regent with a Masters of Divinity in 1981, right around the time that their oldest son Ryan came along.

The next stop for the young family was in Hepburn, Saskatchewan, at Bethany Bible College.  There Les taught Old Testament and Ethics, among other things, as well as serving as the Dean of Men.  The family also added a fifth member, Reepicheep the dog, who was with them a long time.  There were no cats. This posting lasted for four years, between 1991 and 1995, until Les received a call from Elk Lake Baptist Church in Victoria.  He accepted, and the family returned to Victoria to stay.

Between 1995 and 2015, a period of twenty years, Les was the pastor at Elk Lake Baptist church.  As with the rest of his life, this period was marked by Les’ steady, thoughtful approach.  A prolific reader, his understanding of the Kingdom of God continued to widen and deepen; it was that vision that animated him.  One of his parishioners said that in twenty years she never heard a bad sermon or a repeat. Beside his regular duties, Les was instrumental in constructing a new church building, participating in various parachurch organizations, and, in 2015, obtaining a Doctorate of Ministry from Carey Hall in Vancouver.

When his time at Elk Lake came to an end, Les became the Director of the Spiritual Formation Department at Carey Hall. He eventually cut back to being an adjunct professor until failing health forced him to retire for good at the end of 2021.

In addition to his passion for the spiritual life, Les was a devoted husband, father, and grandfather.  He was an avid bird watcher, a nature lover, a gardener, and a Canucks fan.  He enjoyed music—Steve Bell particularly—but he wasn’t a great singer.  Except the Yellow Rose of Texas. He sang that with gusto.  As previously mentioned, he collected and read an astonishing number of books.  About everything.

One of his uncles once said that Les brought calm to a room just by walking into it, which was profoundly true.  By nature he was thoughtful, unassuming, and approachable; by intention he was settled and unwavering. His favorite quote, which hung on his office wall, came from Reepicheep, the mouse of Narnian fame (after whom the family dog was named).  Reepicheep was a brave and loyal warrior whose sole ambition was to reach Aslan’s land, an ambition which resonated deeply with Les.  Hence on Les’ office wall was pinned the following quote from Reepicheep in “Voyage of the Dawn Treader”:

While I can, I sail east in the Dawn Treader.  When she fails me, I paddle east in my coracle.  When she sinks, I shall swim east with my four paws. And when I can swim no longer, if I have not reached Aslan’s country, or shot over the edge of the world into some vast cataract, I shall sink with my nose to the sunrise.

In a nutshell, that was Les.

A funeral service for the late Leslie Biggs will be held on Sunday, October 2, at Elk Lake Baptist Church, 5349 Patricia Bay Highway, Victoria B.C., at 3:00 PM.  Refreshments to follow in the church hall.