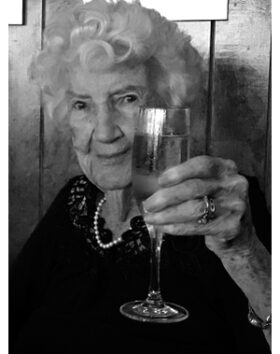 Mom was born at home in 1919 in the small village of Red Willow Alberta.  She died in 2021 at the age of 102 in her own home in her own bed on her own terms.  Her parents were Mary Ellen (Connaught) Stewart and Archie Stewart.  She was the 6th of 7 children and the second to be born in Canada, the elder children having been born in North Dakota.  The family were industrious farmers and even through the Depression they never lacked food.

Margaret and her younger sister Bernice rode their horse Sadie to a one-room schoolhouse.  When it was too cold their father picked them up in a horse-drawn sleigh.  Mom was never much of a farm girl, preferring books and visions of a big city, and was lucky enough to have a father who encouraged these aberrations.

Forced to leave school in Grade 10 and work in the cafeteria of the local hospital she always felt cheated of an education.   Before long she made the move to Edmonton, the closest big city, where she first worked in a dress shop and as a model.  Her fortunes soon improved when she was hired on at Air Craft Repairs in the parts department and met her soul mate, a young mechanic, Morris Dunn.

After too few dates Morris decided to enlist in the Royal Navy and shipped off to Britain at the start of the war.  When Morris returned some 6 years later one of his first stops was to look up Margaret.  Morris too had left school in Grade 10.  Whatever formal education they lacked as a couple was made up in imagination and hard work.

They married in 1947 and moved into a tiny home Morris had built in the new subdivision of Jasper Place.  Now subsumed by the city it was at the time a fledgling community with few luxuries.  Morris was working as a mechanic for Canadian Pacific Airlines but when their first daughter was born in 1948 he wanted to be closer to home and became a builder.  Fast forward to numerous homes sold off as soon as they were built and marketable to 1951 when they opened Dunn’s Auto Court on Hgy 16 East of Edmonton.  A second daughter arrived and Margaret took on the running of the Auto Court while Morris again worked as an airplane mechanic, drove a dump truck, and continued building on to the Auto Court.

When their eldest was ready for school they sold the Auto Court and moved into a 2 bedroom bungalow Morris had built-in Bonnie Soon.  Margaret became a full-time mother able to indulge her love of the domestic arts.  In 1958 they welcomed their son who completed the family.  As much as she loved her family the core was always Margaret and Morris, two halves of the same coin.

On a spring trip to the coast, Margaret fell in love with Victoria and in 1963 the family moved there.  Margaret continued her passion for collecting antiques, exotic cooking and travel.  As their children began to leave home the travels expanded as did their group of friends.

By the time her first grandchild had arrived Margaret had settled into a life of travel, homemaking, bridge, reading and boating.  The latter was not her idea but the great joy of Morris.  Despite falling off the bow of their cruiser into black icy waters and having this same vessel burn down while they watched from a lifeboat, Margaret finally agreed to the construction of a new (sink-proof) boat.

When Margaret and Morris finally hung up their life jackets their three children had expanded to include grandchildren and great-grandchildren.  The child who rode her horse to a one-room school had morphed into the woman who flew on the Concorde.

After the death of Morris in many ways Margaret was a bird with her wings clipped.  While she continued to take an interest in her ever-expanding family her world gradually shrank.  Yet Margaret never lost the spark that had propelled her to live to the age of 102.  When asked how she was she inevitably replied “Well it’s a good day to be alive.”

She continued to recite poetry and was always delighted to make a point with one of her favourites, such as Robbie Burns’ line “O wad some Pow’r the giftie gie us; To see oursels as ithers see us! “(Oh, would some Power give us the gift; To see ourselves as others see us!) T

The family would like to thank Dr. Richard Grimwood, Brittany Hawkes RN, Melody, Michelle, Shirley, Anna, Myrna, and Sheila for the outstanding care our Mother received.

The Celebration of Life will be held Saturday, December 11, 2021 at 10:00 am in the Sequoia Centre at McCall Gardens, 4665 Falaise Drive, Victoria, BC.  For those who wish to attend via zoom, the link is below.   Please use your video camera when joining so that family in attendance can see you and feel your support.

Instead of flowers those wishing to make a donation might consider Pacific Wild (pacificwild.org) who endeavor to support healthy and protected ecosystems throughout the northwest Pacific region, an area beloved by Margaret and Morris in their decades of boating.