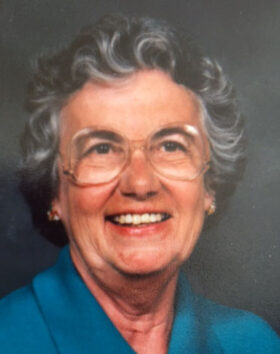 Marjorie Chapman was born and educated in Calgary, Alberta. She was employed by the Canadian Department of National Defence in Calgary from 1942 until 1959 when she was transferred to the Canadian Defence Staff in Washington, D.C. She remained there until her retirement in 1978. In 1970 she met and married Donald George Chapman, a Canadian retired from the Royal Canadian Air Force, then employed by the New Zealand Defence Staff in Washington. Don and Marjorie made frequent trips to the Maritime Provinces and Ontario until their retirement to Penetanguishene, Ontario in 1978.

They enjoyed golfing, cross-country skiing and travelling, until his death in 1986. Later she became a volunteer at the Penetanguishene General Hospital. Marjorie moved to Victoria in 1990 where she was active on the Strata Council of her Condo, the Saanich Newcomers’ Club, the Oak Bay Lawn Bowling Club and the Handbell Choir of St. Andrew’s Presbyterian Church, until retiring from these activities after 2000.

Marjorie passed away on June 29, 2021 during the recent extreme heat wave in Victoria. She was predeceased by her husband Donald, her sister Dorothy Wright, Calgary, and her brother Donald Carmichael, Edmonton.

Burial will be in the Chapman Plot at the First Presbyterian Church Cemetery, Penetanguishene. No flowers by request. Donations may be made to the BC SPCA Victoria  https://spca.bc.ca/donations/make-a-donation  or the Salvation Army   http://www.victoriaarc.org/how-to-donate.html