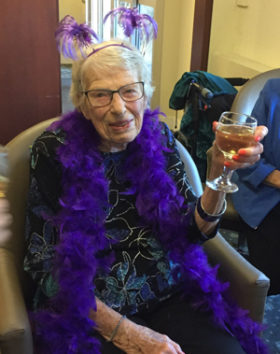 With great sadness, we share the passing of a wonderful friend, Aunt, Grandmother and Great Grandmother. Marj left us peacefully on February 21, 2018 at the Richmond Pavilion Hospice in Victoria. Born Ella Marjorie Sherk in the family farmhouse near the small Saskatchewan community of Stranraer on February 4, 1921. Marjorie was the third child of Bessie and Will Sherk. Marjorie attended school close by in Winona and Stranraer. After attending Normal school, Marj reluctantly became a teacher. This was a short career path followed by another short stint as a secretary before she found true passion and pursued her dream of becoming a Nurse. After completing her training in Woodstock, Ontario, she found her first job as a public health nurse in Red Lake. A few years later, she moved to London, England where she loved to travel with her nursing friends. While in England, she trained as a midwife. After returning to Canada, she received a Bachelor of Science in Nursing from the University of Saskatchewan. She, as always, was very active. She enjoyed square dancing and it was through that activity that she met and married Wilbert Lawley. After Wilbert’s death, she met Allan Morden in Saskatoon. They married and moved to Victoria in 1979. They were happily married for 30 years and could often be found sharing time together walking in their community. Marj was always healthy and active, participating in many activities including The Red Cross, the Royal Canadian Legion, YMCA and the Y Walkers club. She was a dedicated and loyal friend with a keen mind always interested in others. When Marj became your friend it was for life, some friends she had for over 90 years! A lifelong learner, Marj embraced technology and even recently could be found consulting her iPad and reading e-books. She was the family genealogist and her recollection of dates and events was astounding. Marj celebrated her 97th birthday on February 4th with friends and family; a truly wonderful celebration of her many years.

She will be greatly missed and fondly remembered by many.