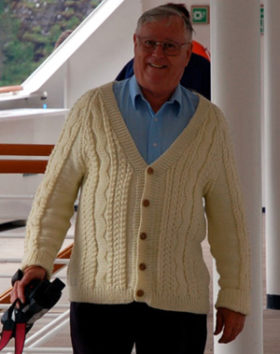 Morey Futcher was the firstborn of Ralph and Lucille Futcher; born in Vancouver April 3, 1934. His 3 sisters, in birth order, Caroline Futcher Helgesen, Sandra Futcher Milroy and Lorna Long were all born at Pioneer Mine. Morey had vivid memories of the time he was babysitting a young Lorna, born 1942, and she was running down the road starkers – And going as fast as she could away from him!

The Futcher family moved to Long Beach after Lorna was born. There was an Airforce base there and father Ralph was an engineer. Morey started school by correspondence. There were numerous stories about the size of crabs and life growing up in Long Beach. Crabs were much larger then, practically the size of dinosaurs according to Morey. But anyone who knew him knew that he didn’t let the facts get in the way of a good story. And the stories just got bigger and better with time, like the dinosaur sized crabs.

And then there’s his Kinsol Trestle story.  Morey and cousin James, while visiting grandparents Nana and Poppy at their Shawnigan Lake waterfront property ‘Cliffside’ would go exploring on a regular basis.  Now, Cliffside was at the southern end of the lake and the Kinsol Trestle was at the northern end but they would just follow the railway tracks up the line. But, one day and Morey swears it was James’ fault, (probably was both of them) they stayed on the Kinsol Trestle a little too long.  The train came and there was no time to get off the trestle.  So 2 boys ended up climbing under the trestle and clinging for dear life underneath.  He never walked over that trestle again!! 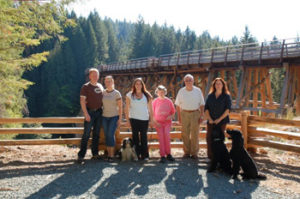 Figure 1: 60 years after his childhood misadventure, (he never returned until this family outing), Morey revisits the Kinsol Trestle site. This time he did not climb under the trestle and cling to the wood supports.

Around 1943/1944 the family moved to Victoria where Morey attended Glenlyon private school.  Then the family returned to Long Beach in the latter part of 1945.  Morey still attended Glenlyon and commuted back and forth to Long Beach.  Cue more stories!  The Headmaster would put Morey on a bus, then he would transfer to the train station, then stay overnight at Port Alberni, and finally arrived home via a transport to Long Beach (aboard the Uchuck.)  Not a short commute, and, this was as a young person on his own.  He never had any problems doing the commute.  He did say it was a fairly lengthy trip.

Long Beach also gave Morey an excellent driving instruction base.  He learned to drive on the beach – literally – on the beach! And eventually took his driver’s test in a dump truck.  First time the tester had ever seen a dump truck used for a road test.  Morey passed with flying colours.

1947 brought the family back to Victoria.  Caroline lived with their Auntie Eleanor and went to school in Victoria.  Morey went to Belmont High in Colwood and helped Ralph and Lucille build their house on Farview Road in Colwood.   He had to help catch chickens for dinner sometimes, he didn’t enjoy that part as much. When the house was done and the school year ended, the family was all together, living at Farview and attending the local schools.

Morey and Norman Helgesen were partners in Colwood Contracting and Futcher & Helgesen Ltd.  Travelling with Morey on the island was a continuous commentary on past jobs.  ‘Oh, I remember the time we did the waterlines here.’  ‘Well, well, hasn’t this all changed since we put the sewer lines in.’    ‘Hard to believe that the old fence we did is still standing.  Pays to do good work!’

The family business stayed a family business when Mark Anderson met Patricia in 1979. By August 1980, Mark was working at Futcher & Helgesen. By 1983, he had married into the business.

Morey hung up his hat at Futcher & Helgesen and handed over the reins in 1997.  Retirement gave him time to work on his beloved Suburban ‘George’. He loved exploring the world of mechanics, gardening, cooking and woodworking.  Morey’s very inventive mind was always working on a way to build things better, he never stopped dreaming of projects that he would work on, ideas for improvements were constantly his partner.

But his favourite time was family time, he was always ready for a family dinner, family weekend, family road trip, you name it, he was there!  Usually with way more than he was asked to contribute.  You ask for 3 grapefruits, he brought 10. Don’t have enough knives, it’s okay he brought his 6 and the knife sharpener too. And just maybe he brought butter, sugar, cream, some extra ham, maybe a roast or two, you know, just the weekend essentials.  (Don’t remember him bringing green vegetables though, hmmm.) 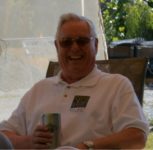 Figure 2: Enjoying time with the family at Jungle Creek

Patricia and Mark had 2 children, Caitlin and Rhys. Morey spent many weekends at skating competitions watching them perform.  Always attended everything. Road trips to Prince George with everyone in one car, frequently George.  Drove to Nanaimo and back to take Caitlin to a ballet competition when needed.  Found out that ballet competitions were not his favourite.  Luckily he only had to do that once. He loved skating and tennis, recording all the competitions and then watching them completely.  No fast-forwarding….didn’t want to miss anything.

Joshua really remembers fondly all the times doing yard work, and gardening and learning to use and care for tools, then sitting in the basement and hearing tales of his Poppy’s younger years. Also, sloppy Poppy kisses every time there was a gathering. A big wet cheek smacker. All the hockey games Poppy came to and watched. The summers of being rugrats in Poppy’s yard and sharing ice cream at the table after lunch. Whenever there was an event with the family be a hockey game for Josh or dance for Courtney and or Alyssa or graduation ceremonies, he and mom would be there.

Morey is also survived by his daughter Joyce, grandchildren Felicia, Kiel (wife Dani), Tristan and three great-grandchildren.  His granddaughter Felicia was his special cancer buddy, both having been diagnosed with cancer only months apart. He would drive her to appointments and was an unwavering pillar of strength for her. The language was rather colourful on their trips to and from the cancer clinic, with many complaints about numerous appointments and scans they both had to have. He had an incredible way of keeping her calm and focused on her appointments. She adored him deeply and he was who she always wanted with her for those darn medical appointments.

Cancer and Morey had a long battle.  He was pretty darn sure that he would win.  One week before his passing, he was still driving his granddaughter, Felicia, to her doctor’s appointment.  No problem.  But on November 9, 2019 @ 4:54 p.m. cancer won.  Morey had the last laugh though.  454, coincidentally, was his favourite engine, a big block Chevy.

The family would like to thank Dr. David Woodley, the staff at the Cancer Clinic, hospice and the many doctors and nurses he had taking care of him. We really appreciated our last few years they managed to give us with him. In lieu of flowers, please send donations to the Cancer Clinic.

Morey’s spirit and unwavering optimism, his love of everything bigger and better, his fabulous will to enjoy life lives on with his family. 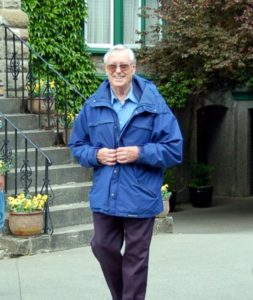 We all miss him greatly.