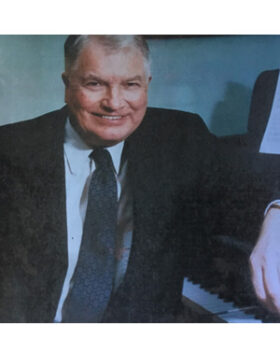 After a brief stay in hospital, Professor Peter Smith died two days short of his 94th birthday.  He is survived by his beloved Masaharu ‘Masa’ Mukai, siblings Mrs. Patricia (William B.) Harris of Toronto, the Rev. Canon David A.P. (Margo) Smith of Perth, Ontario, and Mrs. Harriet (Bruce) Pattison of Fort Myers, Florida, seven nieces and nephews, and many friends around the world.

Born in Belleville, Ontario as the eldest child to the Rev. Canon F. Arthur Smith and Mrs. Marjorie (Pritchard) Smith, Peter showed an early aptitude for music that would define his life.  Composing sheet music and singing in church choirs from an early age, he began piano lessons in earnest at six years old, culminating in his acceptance to the Julliard School in New York in 1946.  He went on to study piano and music history at Cambridge University, eventually teaching those subjects at the University of Manchester (UK) and later the University of Western Ontario.  His specialization was always in keyboard playing, both piano and harpsichord, with a particular love for chamber music.  He adjudicated many music festivals across Canada before his retirement in 1994.  In that year, he moved to Victoria, BC, where he helped to organize the annual Victoria Performing Arts Festival, sang in the St Barnabas choir, and participated in the vibrant musical life of this city.

As an expression of sympathy, a donation in Peter’s memory to the Sooke Philharmonic Orchestra & Chorus would be greatly appreciated.