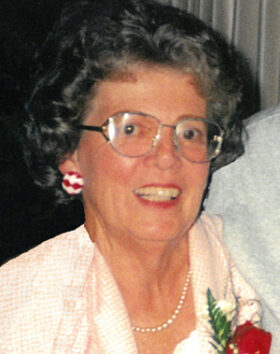 Phyllis’ early life saw her family moving to many Ontario towns including New Liskeard, Carleton, and Ottawa. They briefly passed through Plymouth Township, Wayne County, Michigan, where Phyllis was born, before finally settling in Geraldton, Ontario. As a teenager, she enjoyed speedskating and like her other siblings, worked for the mine operator’s wife – Phyllis did the ironing. She later worked at the department store in Geraldton as a cashier and in the office doing accounts.

In 1948 Phyllis’ friend was to be married in Geraldton; the groom and his best man arrived by train. Phyllis and the bride-to-be met them at the train station, and the best man, Howard Rands, of Sioux Lookout, “knew right away that she would be [his] wife!” They corresponded and Howie proposed to Phyllis by letter on Valentine’s Day and married in June 1949. What followed were 57 blissful years of marriage and six beautiful children.

The young family moved back and forth across the country; Howie was in the Navy, saw action in the Korean War and worked in Ottawa for a time; often Phyllis was the sole parent at home. When there was only one baby (Bruce), Phyllis’ father-in-law, Britton Rands, taught her to drive (a manual!), helped her improve her bookkeeping abilities, and possibly most importantly, how to keep score of baseball games. As the kids grew, so did their interests, and Phyllis drove them to swim club, baseball, football, and hockey practices. Her favourite was always the baseball games – she kept score at every game. Howie was posted from coast to coast as the family grew larger. With all the kids piled in the car, the family would drive back and forth from Aldergrove to Halifax, Port Arthur, or Cornwallis, always stopping in Sioux Lookout and Geraldton to visit their parents. They eventually settled down in Victoria in 1964 for good.

Once the kids were grown and out of the house, Phyllis put her talents into volunteering. She was a dedicated member and treasurer for her local chapter of TOPS for 40 years, canvassed for the Heart & Stroke foundation, and volunteered her time during civil elections. Every (fair weather) morning, she would be up early packing lunch for her husband and his best friend and neighbour, Gordie Peters, for their fishing trips. There was always a well stocked “jam cupboard” full of canned salmon, jams, jellies, and, later, chutney in Phyllis’ house.

Then the grandchildren started arriving. Countless fun times with these kids included Beacon Hill Park, Gyro Park, Playfair Park, the Royal BC Museum, and walking nearly every day to nearby Hillside Mall. Summers were spent gardening and harvesting fruit trees and raspberries while listening to baseball games outside on the radio. Her love of roses was especially realized with numerous varieties growing in her yard. Evenings were spent watching baseball on tv or taking a drive with Howie along the waterfront in Victoria to watch the tourists come off the cruise ships (all the while listening to baseball on the radio, of course). Winters were spent watching old movies and British mysteries. In later years after Howie passed away, Phyllis continued to spend hours watching baseball on tv and enjoying a glass of wine while simultaneously listening to her favourite team, the Seattle Mariners, on the radio – yes, while the tv was tuned to other games! Phyllis was an ace in her home run pool; after her passing, her family found her baseball winnings stashed away in a top drawer.

Predeceased by her husband Howard in 2006, daughters-in-law Sheryl (2000) and Diane (2020), Phyllis is survived by two of her six siblings, Iris Lester and Audrey Johnston; her children, Bruce, Gordie, Janet (Keith), David, Brian (Toni), and Don (Vera); her grandchildren Shannon, Kimberley Ann (Damien), Donald, Bryce, and Drew; great-grandchildren Sydney, Elizabeth, Olivia, and Avery; and many nieces and nephews. Phyllis was very proud of all her family. She always knew what was happening in each of their lives and was incredibly supportive of them all. Phyllis was a miraculous woman who created extraordinary memories out of ordinary life moments; she will be incredibly missed and loved always. Now, in her own words: “In memory of Phyllis, pour yourself a glass of wine, and enjoy a ball game!”

A Service and reception will be held in the Sequoia Centre at McCall Gardens, 4665 Falaise Drive, on Saturday, December 10, 2022 at 2:00pm.  In lieu of flowers, Phyllis requested donations be made to The BC Lung Association https://bclung.ca/about-us/make-donation