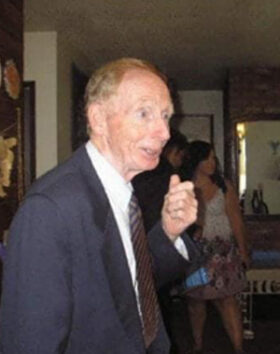 Richard Gibson Nash, born May 1, 1934 in Victoria, British Columbia to Arthur & Athalie Beynon Nash, Passed away peacefully at the age of 88, on June 16, 2022 at Royal Jubilee Hospital in Victoria BC.

Richard raised his family in Duncan BC, and in his earlier days was an accomplished pilot and instructor, and because of his love of flying, he started a flying program for students at Brentwood College School in Mill Bay BC as well as being a teacher of Biology there. Later in life he continued as a marine biologist operating a business on Thetis Island, then substitute teacher while preparing to be a real estate agent.

His many friends and colleagues will attest he was a wonderful and knowledgeable man. He will always be remembered as being the utmost kind, supportive, caring man, husband and father. Richard loved his family more then anything. He enjoyed taking his grandchildren on his boat and teaching them about the ocean. Richard was always so much fun with his stories from his days at McGill University and his lock picking capuchin monkey named Tommy. Even though Richard could seem stoic and serious, he had a wonderful sense of humour and was known to hold “who can hop on one foot the longest” contests at parties and always won. He was a blessing to us and made the world a better place to anyone whom he loved. He will be missed greatly.