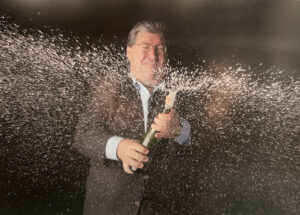 After having endured several months of poor health, on Tuesday, September 6th in the afternoon, Robert (Bob) MacRitchie passed away peacefully at the age of 76, in his home that he loved so much, with clear skies overhead and the waters of Cadboro Bay glistening in the sun, at peace at last. He had been cared for at home during his illness. The last few days of his life, his loving daughter joined his wife and life partner of 44 years to be with her father and on the day of his passing, his son and grandson came to say goodbye.

Bob was born in Halifax, Nova Scotia, spent his junior years in Edmonton and moved to Vancouver for his Senior school years, University education and to start an amazing life journey. Always the industrious entrepreneur, which began at the age of 14, organizing paper deliveries, with a team of people working with him. In 1968 he started up a courier and armored car company with his father. A while later there was a postal strike, annoying most of us but “An Amazing Opportunity” for someone with vision who could see that window of opportunity for growth. Bob had really found his niche and rapidly expanded the company across Canada. With that success behind him he sold the company and continued to pursue other entrepreneurial endeavors until 1978, when he shifted his talents and focus into the world of High-Tech, in sales and marketing of course! He initially joined International Computers and then to Apple Computers where he was involved in the launch of the “MAC” in Western Canada. Now recognized for his success, he was approached by Sun Microsystems, which would ultimately transform his and his wife’s lives forever.

Originally based with Sun Microsystems Toronto for approximately one year, he was promoted to a position in Silicon Valley and the whirlwind of global business and travelling began. He was appointed President Sun Japan, commuting from California. Two years later he was promoted to the position of Vice President, Asia Pacific Group based in Hong Kong, where he remained for 3 years until repatriated to Silicon Valley. If the truth be known, he did not want to leave. One should hasten to add the travel opportunities, social life and numerous black-tie events and parties played no role in this! Back in Silicon Valley, for a few years he took on several assignments including Vice President of The International Americas Group and other assignments related to Global Sales.

Whilst it was a time of many diverse challenges for him, it awarded him the honour to become Executive Vice President of Global Sales and the pinnacle of his career. Over the many years at Sun he had won numerous awards for achievement, but one of his most coveted was the “The 2001 Sun Women’s Leadership Award…Women’s Champion”. That tells you so much about him. He felt very strongly for equal opportunity for everyone.

He may also be one of the few people who, when invited to a High-Tech event at the White House, took his pocket camera with him, had it approved by security, and has informal photographs with The Clintons in his office, always good for another story to tell. Of course, as the Women’s Champion, he thoroughly enjoyed his conversation with Hillary. Bob always said, “set your goals and expectations high, never be afraid to ask, people can only say no, and if they do say no that was an invitation to change people’s minds to yes”.

In 1998 he and his wife selected Victoria as their choice for their retirement destination, built a home, and moved to Victoria in 2000 and have endeavored to play an active part in the community since. Much to the chagrin of his wife, he continued to commute to California for two more years, as neither he nor Sun were quite ready to go their separate ways!

As an intellectual man, it is no surprise that one of his two main retirement hobbies was spending several hours a day on the internet, following the progress of Apple and Sun, keeping abreast of world affairs, and keeping in touch with his friends and colleagues around the world. By contrast his second hobby was woodworking which was always a surprise and sense of curiosity to people. In his “Shop Clothes”, saw dust on the floor, tools scattered around and paint on the floor from the less than slow patient approach to painting, hardly the image of a successful executive! Bob was also very committed to giving back recognizing that he had been so incredibly fortunate in his lifetime. He supported youth programs, the Arts, in particular Pacific Opera, for whom he served on the board, and programs to provide support and opportunity for people less fortunate than himself. As an ardent lover of animals and wildlife, Bob and his wife have always considered the SPCA to be closest to their hearts. According to the unknown author of “Rainbow Bridge”, Bob will have crossed the bridge after being reunited with his beloved dogs that have passed, but never absent from his heart…

In the last year, with failing health, by total contrast, he was content to sit on the terrace with his cell phone, listening to country music, enjoying the wildlife, squirrels, birds, rabbits, for whom hilariously he had given names; and enjoying looking out onto the bay. Bob was a complex man, a man of ideas, a driving force in business but personally, very private, who sometimes was quite intimidating in his stature, but really a gentle giant. He was stubborn, focused, difficult at times buy always much loved and respected for it. He will be missed by his extended family here in BC, his niece and relatives in Alberta, and his friends and business colleagues around the world. To those who treasured him the most, he will be profoundly missed, always loved and forever remembered.

By request no service was held, only a private family farewell. It is requested that any memorial tributes that wish to be made are as a donation to the Victoria Branch of the SPCA via his Personal Memorial Page at spca.bc.ca/memorial/bobmacritchie.