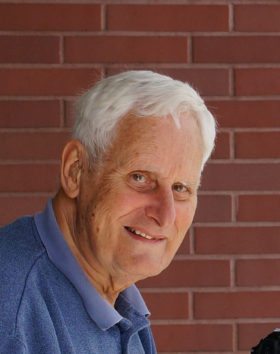 Robert (Bob) died peacefully in Victoria, B.C. at 87 years, after a long battle with cancer. He was born in Toronto, Ontario and grew up there and in Gore’s Landing, Ontario where he spent his summers.  He graduated from Ryerson College as an Electronics Technologist.  Working in a changing film and television broadcasting industry provided him challenges throughout his career which was based in Toronto, Ottawa, St. John’s and Halifax.  He was recognized as a lifetime member of the Society of Television and Motion Picture Engineers, was a brilliant innovator in his field and a strong believer in the value of television as an educational tool.  Robert and his wife Sheila retired to Ottawa to be close to their grandsons.  In 2011, widowed Robert moved to British Columbia and enjoyed his final years residing in Victoria.  He was passionate about his work, loved his family and enjoyed sailing on the Ottawa River and in the Gulf Islands.

Robert was predeceased by his wife, Sheila (nee Ward) in 2010 and his only brother, Richard F. Zeidler in 2018. Robert is survived by his children, Lynn Marie (Stephen J. Dorsay) and Robert Michael (Donna Marie); and his grandsons, Randall Colin Zeidler and Robin Grant Zeidler from Michael’s first marriage to Krista Karen Zaleski.  He will be missed by his nieces and nephews in British Columbia, Ontario, Quebec, New York and Texas as well as other relatives, friends and neighbours across Canada and the U.S.

A Memorial Service for Robert T. Zeidler will be scheduled in Ontario in the Spring of 2020 coincident will his interment in Cobourg, Ontario.

In lieu of flowers, donations may be made to the BC Cancer Agency, 2410 Lee Avenue, Victoria, BC V8R 6V5  http://donate.bccancerfoundation.com/   or the Knowledge Network Corporation, 4355 Mathissi Place, Burnaby BC V5G 4S8 (www.knowlege.ca).