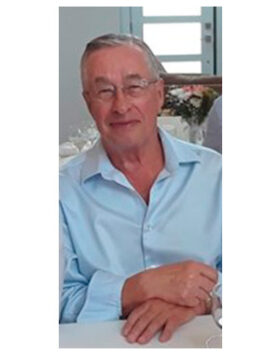 Predeceased by his mother Elizabeth “Betty” in 2002, his father Joseph “Joe” in 2004, and his brother Armand in 2019, Ron is survived by his wife, Paulette; his three children, Brent, Blake (Pauwlina) and Dionne; his grandchildren, Taylor, Vikram, Pradeep, Ryan and Ellie; his step grand-children Sophia, Paloma and Cormac, and his siblings Dennis, Rod and Glenda.

Ron was raised on a farm near Lemberg.  He attended high school in North Battleford, Saskatchewan.  Ron and Paulette married in 1964 after they completed their full-time studies at the University of Saskatchewan, where Ron completed degrees in both chemical engineering (1964) and liberal arts (1966).  Ron spent his entire career in the oil and gas industry in Alberta, first in rural Alberta then finally in Calgary, where Ron, Paulette, and sons Brent and Blake moved in 1972. He worked for companies such as Amoco, PetroFina and lastly Imperial Oil.  Ron progressed in his career, was promoted to manager, director and finally vice-president of a mid-sized oil company.  Ron was active in his children’s lives, acting as hockey and soccer coach, taking them to piano lessons and hockey games.  He learned the card game of bridge while at university.  Playing bridge was a lifelong pleasure as it combined luck, skill and socializing with friends.  He enjoyed landscaping the front and back yards and doing house improvement projects indoors and out.  He spent vacations with both his parents and parents-in-law in Saskatchewan and many summers in the Okanagan Valley in BC.

He planned, and did, retire early.  He and Paulette had previously bought land in Mill Bay on Vancouver Island; he realized their dream to build a house there, enthusiastically planning and overseeing the process over the course of a year, completing in 1995.  Ron pursued his two athletic passions, golf and curling, and continued playing bridge for several years.

Ron was practical, pragmatic and sometimes impatient to “get the show on the road” to get things done.  He had little patience with “Dummkopfs” who “didn’t know the difference between their bottom and a hole in the ground,” and who could “shove it where the sun doesn’t shine.” A lucky individual “must have a horseshoe up his behind,” and a bad driver “got his license from a Cracker Jack box.”  He was unsentimental, focusing on the present and avoided talking about the past.  He was not interested in travel, but due to his devotion to his wife, he accompanied her on ocean cruises in their retirement.

In lieu of flowers, donations may be made to the Canadian Heart and Stroke Foundation.